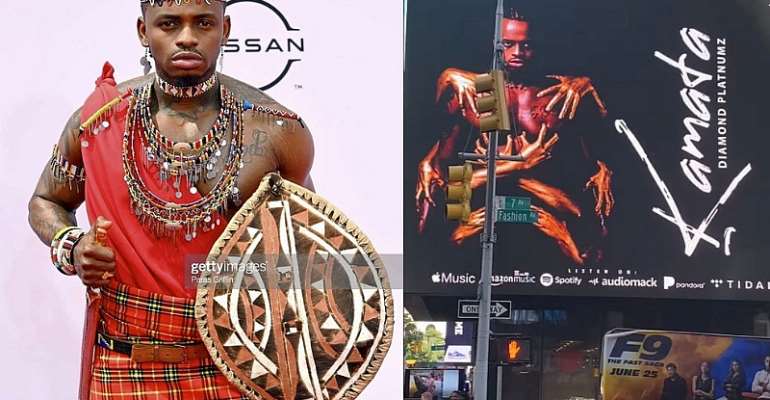 The artist got his fans on the edge of their seats with the new hit party thriller. “Kamata“ is rated as one of the new street songs causing stir and leaving people in awe of its wordsmith powers.

Diamond's efforts in the music industry has seen him nominated for various awards including the recent BET nomination for the best international act alongside other African heavyweight singers like Wizkid and Burnaboy.

Despite narrowly missing the award to Nigerian Afrobeat singer Burna Boy, the kamwambie crooner made sure he grabbed attention with his unique outfit for the Awards Gala.

Many who showed up at the awards were rocking designer clothes and suits but he instead, opted for a classic African attire to represent his Swahili Nation and it was indeed stunning.

Reacting to the news of the Bilboard placement and global awareness generated by the new song, Kim Kayndo, Head of Digital Department at the artiste's record label, WCB Wasafi, said: "Am not entirely surprised with the buzz the song has generated since its release. Diamond has over the years nortured his talent well, producing some of the best songs. This is just another prove of his rare talent and am glad with the success it has enjoyed within this short period".

Mr Akeju, a director at Prime Music Partners who alongside his team, delivered the distribution on the Bilboards, noted : " We are glad to have partnered with Diamond on this project. He is a legend not just in Africa but globally. We are celebrating his success now and hoping to see more as he continues to inspire us with his creativity".