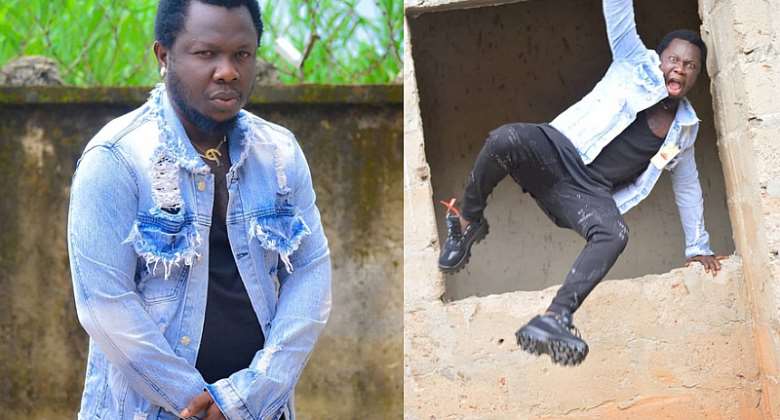 Resilience and hard work has been part of the success stories of many entertainers across the globe. In Africa, Nigeria precisely, one actor who followed similar path to build a reputation as one of the best talents in Nollywood is Don Charles Mmaduka, famously called Pitakwa.

Pitakwa in a recent chat disclosed his childhood experience and how his mum had to move mountains to raise funds for his education.

"Personally, I was born in the late 80s and raised in a poor family. I didn't attend any special school. And growing up in the early 90s, we mostly attended kindergarten where we wrote with chalk and slate, not the present day creche and nursery schools.

" My parents were poor. I watched my mother roast corn with pear; plantain; yam; sold the gift clothes she had; and equally packed sands from drainage under heavy rainfall so we could go to school," he said.

The actor also shared a pathetic story of a woman who was denied by her daughter on account of the fake lifestyle she observed in her homestead on campus.

" As an undergraduate, I had a lodgemate, a beautiful girl, in another department from mine, she likes to dress classy, talk millions and gave us the impression that she was from a rich home.

" Those of us who were not from rich homes kept our cool and believed her. However, she didn't really look rich as she soon became a notorious debtor borrowing money, designer dresses and shoes from friends just to keep up with the fake lifestyle.

"One day, something happened. A woman came to our hostel and said she was looking for Ngozi (not her real name ). We were surprised when she mentioned that she came looking for her daughter. There was nothing rich and influential about the woman. She came on a commercial bike, not even a car, and the clothes she was wearing could not be worn by some common people. Her handbag was peeling off due to the low quality and the age of the bag. A typical village woman.

"We directed her to Ngozi's room but before she could say thank you, Ngozi 'don burst out' and right there in our presence, she denied ever knowing the woman despite the striking resemblance between both of them. The woman was shocked and she wept bitterly before she left amidst shame and embarrassment. That's the generation we live in," he added.

Every one go through difficult moments in their life. It could be from family, business or just anything; And for Pitakwa, he conquers his fear and struggles with positive mindset.

" I have always worked hard knowing I had no one to help me. No backup. No Inheritance. Just resilience and God. My first book, THE UNDERGRADUATE MILLIONAIRE was published in the United Kingdom when I was barely 22. And it gave me some edge and a little platform for bigger ventures.

"Again, I acknowledge my mother, a strong woman who had sacrificed so much for me, my own MAMA UJU who went hungry just to see me through school, and she never let a day go by without praying for me. I only pray for more blessings from God so that I can give her the very life she deserves. I have no point to prove, I'm from a poor home.

"When you live a fake life, you can go to any extent to prove to people that you are real even when you are not. You lie more often to the point that your mind starts accepting lies as the truth, that is how you gradually loose yourself.

"Always have a dream, a focal point, where you want to see yourself in the nearest future and work towards it. Don't forget to live within your means; be contented with yourself even as you work and pray for a better you.

"There were days I went hungry for days because there was nothing to eat. Today, when I go hungry, it's because I might be confused on the choice of what to eat. Hardwork may not pay off immediately, but on the long run, it does pay off. Like I always say, "Do not be so proud that your destiny helper will see you and be calling you Odogwu, " he concluded.