Censors Board destroys illicit films worth N50m in Kaduna 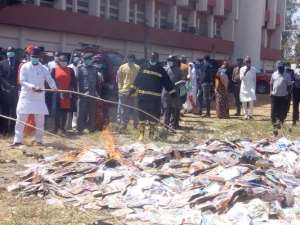 The National Film and Video Censors Board (NFVCB) on Wednesday in Kaduna destroyed pornographic and other unapproved films and video works valued at not less than N50 million.

Mr Adedayo Thomas, NFVCB Executive Director, said that the items were seized from markets during raid by board officers, adding that their destruction would serve as deterrent.

According to him, the board has zero-tolerance as regulator of the motion picture industry against distribution of unapproved and prohibited films and video works in Nigeria.

“Our enforcement drive within a period resulted in the removal of these unapproved films and video works with street value of over N50 million.

“The government has been promoting avenues to continually diversify the economy to promote economic growth and pursue strategic objectives of job creation, youth empowerment, improved human capital and improved business.

“If the creative industry is in a mess, investors will not come; that is why we are cleaning the market for film owners to enjoy reward for their work,’’ he said.

Thomas attributed the success in its operations to the unrelenting activities of the NFVCB Task Force, a body constituted to champion the raid of illegal film outlets across the country.

He said that the collaboration of the police had sped up the arrest and prosecution of marketers and distributors of illicit films and video works.

“The objective of President Muhammadu Buhari’s Economic Recovery and Growth Plan (ERGP) is the continuous improvement on, respect for, enforcement of intellectual property and ownership rights in the film industry.

“This is pursued by discouraging the distribution of unapproved, unclassified and unwholesome films and tackling other illicit activities in the film market.

“Industry players lose billions of naira to adulterated, smuggled and unclassified works through agents and distributors, which ultimately denies the government its statutory revenues.

“It is on this premise that the NFVCB two years ago re-constituted the national task force on unapproved movies with the support of the Minister of Information and Culture.

“The immediate intervention of the task force, which includes industry stakeholders, guilds and in-house operation staff of the board led to unprecedented massive raid successes across the country,” he said.

Mr Umar Muri, Kaduna State Commissioner of Police (CP), in his remark commended the NFVCB for remaining steadfast in the fight against illicit films.

Muri, who was represented by CSP Aminu Lawan noted that some of the vices in the society could be attributed to unwholesome films watched by the youth.

He, therefore, urged filmmakers to always submit their works for censoring and approval by the NFVCB as required by law.

“I want to assure the board that the Police will continue to support its operations in the state,” he said.

NAN reports that the officials of the NFVCB, the Police and the Federal Fire Service were among stakeholders present at the public burning of the products.

Others were government functionaries, State Director of the National Orientation Agency (NOA) and representatives of filmmakers in the state.(NAN)