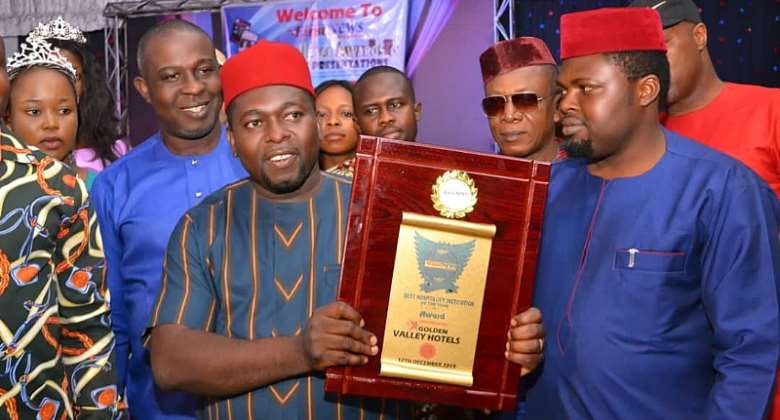 Enugu State Governor, Ifeanyi Ugwuanyi, has been honoured with the award of distinction as FirstNews Man of the Millenium.

He was offered the award in recognition of his outstanding achievement in promoting literary work, peace and security in Enugu State on the occasion of FirstNews Magazine Excellence Awards and Book Presentations held Thursday in Enugu.

This year’s award centred on honouring men and women who have distinguished themselves in development, employment and integrity across all quarters in the state.

The governor entered the venue, received the award and immediately left for public function after thanking the publishers of FirstNews Magazine for promoting and projecting community development and the image of the state through its news reports.

He was however jubilant upon receiving the award, appreciating the people of the state for the opportunity to serve them as their governor.

Golden Valley Hotels, with Chief Joel Ugwoke (Mmagha) as CEO/MD, was awarded Best Hospitality Institution of the Year by FirstNews Magazine. This accolade according to the organisers of the event was in recognition of the hospitality and tranquillity witnessed at the hotel which is located at Ugwu Awarawa, Nsukka in Enugu state.

Receiving the award, the MD and CEO, Chief Joel Ugwoke thanked those who have through visits to his investments witnessed enormous peace and serenity at his hotels and have deemed his institution a worthy recipient of the accolade.

“I am delighted to receive this award. At a time where lobbies are done for awards and recognitions, I am pleased to accept this accolade. It means so much to me and to the people of Nsukka who are my people. My effort is towards a better life to the people of Nsukka. I have done much to recreate a lively community out of the territory by bringing down entertainment home to them.

As a result of the hotels, Golden Valley Mansion, jobs have been generated. When I see my members of staff and hundred other employees enjoying from my labour; an accumulation of hardwork over the years in Aba, I feel contented.”

Ugwoke, who is also the grand patron of Actors Guild of Nigeria, AGN, has urged Igbo leaders and entrepreneurs to return to the south east to plant their businesses, adding that giving back to community should be the cardinal point in the life of every wealthy Igbo man.

“Igbo leaders should come down and invest in their people. The likes of Ifesinachi whose business ventures in the South East have caused enormous employment and Sam Maduka Onyishi, my role model, has made efforts to employ as many of our people as possible. Those who have made it in life should look back home, invest and employ the youths in their respective domains. If we can come together and put up charities where we can give back to the needy, it will help in the development of Enugu state.

On his role in the AGN
When asked why he is interested in the affairs of Nollywood, the business mogul said he is a fan of the foremost African entertainment industry and that he wants to be remembered as a man who will cause men to right the wrong in the AGN.

“Entertainment is the fabric that holds our society in our time. My interest in Nollywood which has made the industry appoint me as a grand patron is borne out of my resolve for peace, tranquillity and due process. Before, the AGN was in shambles. Through my efforts which engineered the AGN peace conference in 2017, peace has been restored in the guild and I am happy,” he added.