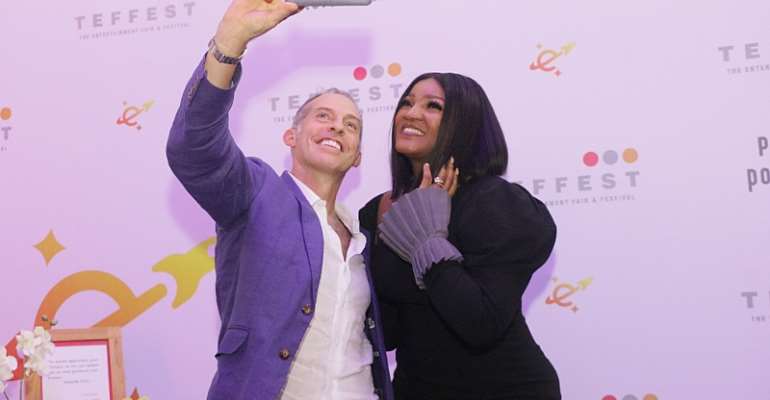 Convener Omotola Jalade-Ekeinde host Google's director of Strategy and operations, Craig Fenton at the Entertainment Fair and Festival which took place on the 29th of November in Lagos.

The well attended fair and festival which had industry stakeholders and celebrities in attendance from comedian Alibaba, Ayo Subair, Efe Omoregbe, Alex Ekubo, Idris Olorunnimbe, Bisola Aiyeola, Richmond Osuji, Frank Edoho, Obi Asika, Joke Silva, Monalisa Chinda, Ibinabo Fibresima, Nse Ikpe-Etim, Eyinne Nwigwe, Toke Makinwa, Osa Ighadoro, amongst others also had Craig Fenton give the keynote address. According to Crunchbase , Craig Fenton is a business leader, entrepreneur, and committed gadget geek who has worked in the technology industry for 20 years. He leads Strategy and Operations at Google in UK and Ireland. The tech executive shared an address to open the summit where he went on to ask the guests to take a selfie with him, He took a walk around the venue with host Omotola Jalde-Ekeinde through the fair after his speech, he danced and took pictures. See some exciting pictures of Craig Fenton, Omotola Jalade-Ekeinde and several other guests as it went down at the most important show business event of 2019:

The Entertainment Fair and Festival went on to deliver on all it promised and more as the most important showbiz event of 2019.