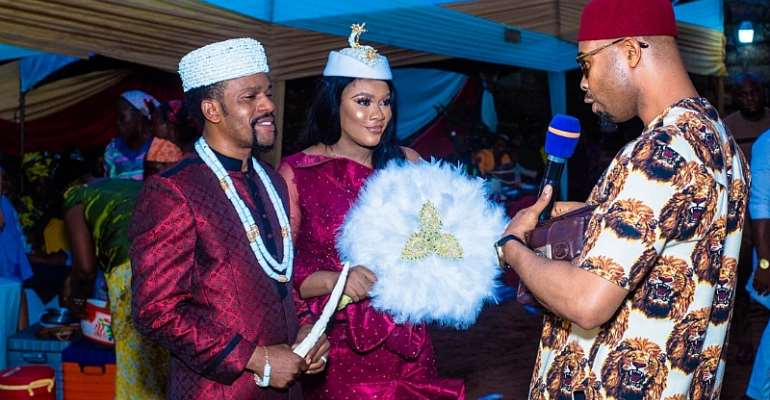 The wedding of Alex Nwankwo and his bride, Esther Ezenwonye, was held over the weekend at Aguata local government Area of Uga in Anambra state, with the distinguished presence, notable and iconic billionaire personalities in Nigeria and across the globe.

The event witnessed the dramatic traditional rites as required under the Uga Tradition, as well as other joyful activities which includes the dance performance by the couples and family members, spreads of lots of money on the couples and massive presentation of gifts.

Speaking to the Groom few minutes after the couple dance with his wife. Mr Nwankwo appreciated the presence of the Anambra state governor, who was well represented, stressing that it was indeed a reflection of his responsive leadership. He also thanked High Chief Johnbosco for making such a distinguished and honorable appearance at his wedding, Alexreports noted that his loyalty to the High Chief will remain undaunted.

He also thanked Dr. Onyeka Eze for his financial support that ensured the success of the Traditional marriage ceremony. He further appreciated everyone who came from far and near to witness the conjugal bliss of his marriage with his delightful wife. He expressed maximum excitement, as he danced his way back to his seat.

The PR strategist AlexReports, whose wedding has been the talk of the town, had arrays of beauty queens that he had managed and promoted, on ground to glamour the event among who are Roseline Muerer, and DJ Barbie who was behind the wheels of steel.

Popular Nollywood actress, Juliet Ibrahim who couldn’t make it to the traditional wedding used her social Media Platform to congratulate one of her publicist AlexReports. Also congratulated the couple is top Comedian AY who posted the video on his Instagram. However, prior to the wedding, Kebbi First Lady, Honorable Tony Nwulu, Hon. Shina Peller, Hon. Ned Nwoko among other top politicians in the country sent a congratulatory message to AlexReports on his wedding.