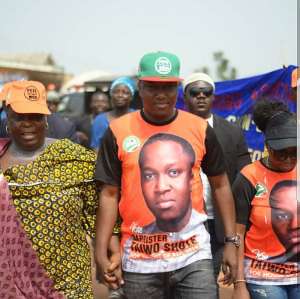 The 2019 Member house of the Federal House of Representative candidate for Ijebu Central Federal Constituency, Barrister Taiwo Shote of the Peoples Democratic Party has expressed appreciation to the Ijebu people for their support during the just concluded election that supposedly delivered him into victory.

He made this appreciation via his Instagram handle few hours ago. He maintained that he owed the Ijebu people a debt of gratitude for courageously standing behind him, despite the announced result by INEC that didn't reflect the choice of the majority of Ijebu people.

In his statement, Barrister Taiwo Shote thanked the Ijebu people for the unconditional love they showed him. He assured them that the mandate will be retrieved.

He maintained that he would serve and represent the people efficiently at the Green Chambers of the National Assembly. He says, "you entrusted me with your mandate and I am not going to trade it for anything".

Barrister Taiwo is a devoted servant to mankind, an erudite Politician and vibrant intellectual. He had contested and won under the PDP, but INEC announced another winner which has left the situation in court.

Reactions from Ijebu people have proven that Barrister Taiwo was truly elected by the people and was indeed the winner because the people came out massively to vote him.

He concluded his statement as he seeked the grace of Almighty God, he says, "we shall triumph and together we shall work and walk together fun ilosiwaju akile Ijebu, once again, I thank you all and may God bless you".