I Stopped Music Because Pressure was too Much…Anita Joseph 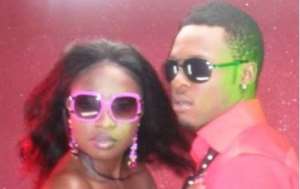 Nollywood actress, Anita Joseph, has left some of her fans asking questions after she revealed that she use to sing but had to stop it.

The actress made this revelation after sharing throwback photos of herself with singer, Flavour. She explained that in doing music, the pressure was too much so she had to push it aside but I now ready to come back.

According to her, “I know some people are still mad at me because I stopped music but the pressure was too much but am back on track so help me God.”