Photos: How Celebrities Iyabo Ojo, Yaw, Lolo 1, Korede Bello, Others Decked Out in Style for the Premiere of 'SMASH' 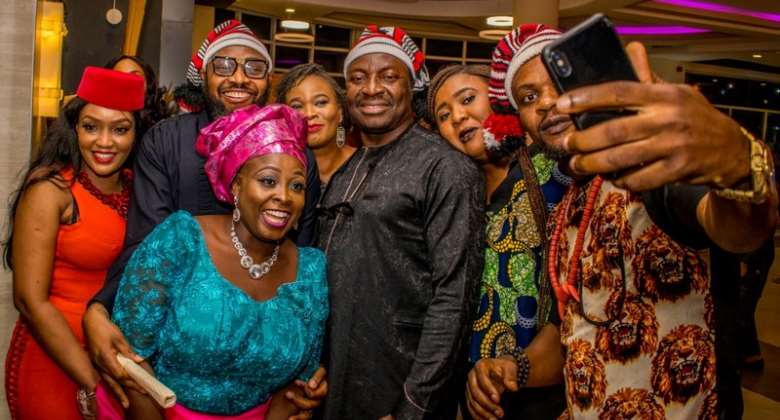 It was an absolutely bubbly atmosphere at the exclusive premiere of 'SMASH', a romantic-comedy produced by Yaw, which held Friday, November 30th at Film House IMAX Cinema, Lekki, Lagos.

News about the movie had emerged a few weeks back following the short trailer which was released by Yaw. The trailer made the rounds across social media - with many fans promising to go see the movie once it's available for viewing in cinemas.

It can be recalled that the trailer prompted a challenge from ace comedian Ayo Makun, popularly known as AY; where he took to social media to post a video of himself calling out the ensemble cast to step out with splendor in traditional outfits for the movie's exclusive premiere, just as he had done with the cast for his own movie 'Merry Men'.

Commenting on the concept of the movie and the message embedded therein, producer Yaw stated; “SMASH is a romantic-comedy with a heart; in the sense that it’s not merely to make you laugh but also to convey meaningful and relatable messages like the concept of love and marriage from the viewpoint of most middle-aged men, tribalism, politics and more. This movie marks my first self-produced movie and I couldn’t be happier to have recruited some of the most talented Nollywood names to help birth it. It took a lot of hard work and dedication and I’d be gratified to know that I’ve not only given thousands of people a reason to laugh heartily but also given them meaningful messages to take home.”

'SMASH' follows the hilarious adventures of five friends; Somachi, Madu, Anayo, Somto and Hector, as they evade marriage despite their ages and individual success.