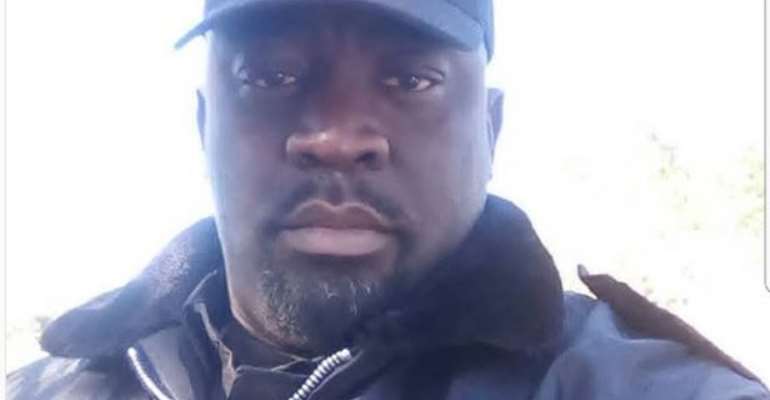 Recently, Nollywood actor, femi Ogedengbe, was put to blast after he publicly admitted that he now does security job in the US for a living and has so far been able to take his family out of Nigeria.

Many chose to insult him and passing various judgement without understanding the real side of Nollywood as many have continued to state that there is no money in the industry as the few doing it are acting from the heart and for the arts.

Legendary comedian, Alibaba, has come out to defend the actor by stressing that some Nigerians do not appreciate someone who does legitimate business for a living but all out to celebrate fraud and looters of the country’s treasury.

According to him, “First off, let me say, my respect for this guy can’t be measured right now. He has blown me away with his handling of the realities in his life. Some people know how to get through life, while others let life get to them. This is a man who put his ego and fame to the back, and faced reality. TO MAKE A BETTER LIFE FOR HIS FAMILY AND HIMSELF. He did not believe the hype. You see, that is exactly the kind of society we are in. Someone who is doing an honest job is vilified and castigated. Even mocked. Just to drive traffic. Then those who are involved in Yahoo Yahoo, kidnapping, 419, looting and taking loans from banks and refusing to pay back are celebrated. Think about it.

“Would we really have been happier if he was famous and his kids couldn't feed? Or was thrown out of his apartment because he couldn't pay rent? Would we have been ok seeing him jump Okada and keke napep? We like to see people who are famous LOOKING RICH. Doesn't matter how they do it. That's pressure. Major pressure. That's why people are forced to steal, turn to prostitution, carry drugs, go into politics and Rob the country blind... because our yardstick for measuring success is flawed to the floor. We only respect thieves. The undergraduate who works at a car wash during holidays is a loser. The one that decides to work as a bar tender or fuel pump attendant is a waste. The only ones that count are the ones that turn up and slay.

“They don’t need to be working. Just twerking and colour blocking is all they need to do. Nollywood is a make believe world. That's why many who jump in get frustrated because they missed the memo. It’s a huge labour of Love. @ajokesilva told me, when I consulted her for what I should charge to do TWP1, "Ali, it’s not like your MCee work ooo! It's a labour of love. We do it for the art and heart". So I was on set for a whole month for what I charge in 4 hours. Most of the lifestyles you see in Nollywood is not supported by the fees for roles played. They earn the money for that life style elsewhere. Yes you become famous. The money from the role can not get you a Rolls. A channel bag is 1.6m. How many movies you wan act to buy am? Wetin I sabi sef?”