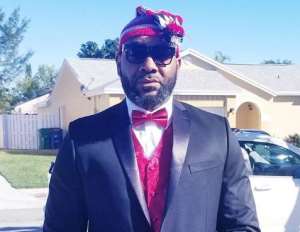 The two were not in good terms that Prince Eke took custody of his three children while his wife was alleged to have moved out when the misunderstanding happened.

After washing their dirty linen in public, the two love birds had secretly settled their beef and reunited together which has enabled the actor travel to the US for about 11months now and still counting.

Although the actor has not left acting, he is now based in the US with the hope of securing a better life for his children as he is yet to state his mission having spent about 11 months.

Writing a letter to his children, he wrote, “LETTER TO MY CHILDREN My dear children ,it's been 11 months since I travelled to the United States of America for a better purpose and I haven't seen you as much as I would love to , the only wealth in this world is children, more than all the money and power on earth , YOU are my treasure . Ceaser, Cleopatra and Monalisa I entrust your welfare to your mother for your OWN best interest , you know how much I look forward to seeing you and to a new period of harmony in our lives ...I remain your loving father ..OKWULUOKA.”

My Running Mate Is God-Fearing, Distinguished Scholar, Consc...
36 minutes ago

We'll Not Have A Campaign So We'll Just Sit Down — NDC Youth...
51 minutes ago