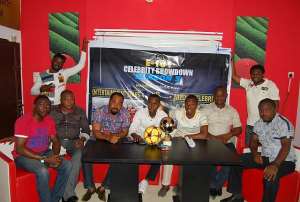 Ahead of the season 3 of the novelty football match between Entertainment Stars and Media Celebrities in Akwa Ibom State coming up on Friday 19th September, 2014, the managers of the two teams have been talking tough; each saying his team will carry the day.

In a press conference held on Wednesday at the Family House of Ndito Boys and Girls, Ewet Housing Estate, Moses Armstrong who doubles as the Manager/Captain of the Entertainment side said his team is bound to win the trophy for the third consecutive time.

“Like it has always been it is going to be like that again and we will win the cup for keeps. We are not afraid of the media team because they are not our match. We will win them for the third consecutive time but this time, it is a pity that the goal margin will be wide. It is going to be something to remember”, the self styled Akwa Ibom finest actor said.

Responding, the team manager of the media side, Amos Etuk said his team will not be beaten again by the Entertainment stars which parades the likes of Okon Lagos, Pasto Goody Goody, Mista Xto, Sir James, stating that the media gurus will maul the entertainers with not less than five goals.

“I want to assure everybody that we are ready to upset history in this edition. We have a very talented and complete side. This is the best team we have ever assembled for this competition. We won't speak on the pages of newspapers or online but we just want to do our talking on the field on the 19thof September and that is why we encourage everybody, all our colleagues and well-wishers to come out and watch us display our talents. We are going to maul them emphatically. I'm predicting like a 5-0 scoreline. I'm happy that the chairman of the Nigeria Union of Journalists (NUJ), Akwa Ibom State Council, Elder Patrick Albert will be there to give us the support and needed backing and cheer the team to victory. I want to assure everybody that the media will not let them down”, said Amos Etuk who is the Editor of Daily NewsWire.

While speaking on behalf of the organizers, the Editor-in-Chief of E-101 Magazine, Ifreke Nseowo stated that this year's edition of the E-101 Celebrity Showdown is better packaged than the previous editions with the prize money being doubled.

He however pleaded with the managers of the two teams not to field mercenaries as the main essence of the competition is to create a synergy between Entertainment and Media industries with the popular/wave-making practioners in both field taking part in the encounter. He said the organizers will screen the list of both teams which is to be submitted to the LOC five days to the match in order to advert a situation whereby the losing side cries foul of the winners fielding mercenaries.

Nseowo further stated that all rules governing FIFA international friendly matches will apply in the match, urging both teams to exhibit fairplay as the novelty is just to create fun and excitement and not a do-or-die affair.

Meanwhile, on Wednesday, the Entertainment Stars played out a 3 all draw with Shelter Afrqiue All Stars while Media Celebrities had their first training session same day at Camp 13 field, Abak Road with most of their star players taking part.