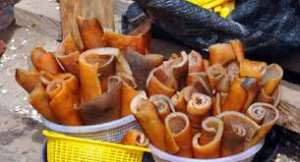 Yesterday, it was widely reported that the Minister of Agriculture announced that the Federal Government was concluding plans to ban the sale and consumption of cow skin and hide popularly known as 'pomo'.

According to reports, this move was to help livestock farmers make more money if cow skins are tanned into leather rather into 'pomo'.

However, this development is not palatable to many Nigerians, who consume the cow skin as meat, which is very cheap in the market. Some have kicked against this move. Many argued that since 'pomo' does not do any harm to the body, it should not be banned by the government.

Another Nigerian said she would not want to live in a country where there is no 'pomo'. A tweet on Twitter read, “The people wey wan ban pomo, shey dem go send special brigade to enter every mama put (roadside canteen), begin check everybody food?”

What is your view on this new development, should 'pomo' be banned to enrich farmers or status quo maintained?

“Chelsea will win the Champions League,” – Prophet T. B. Joshua

It's Davido Again, Posing with the Cash

Withdrawal of Bagbin’s military guards proves Akufo-Addo is ...
26 minutes ago