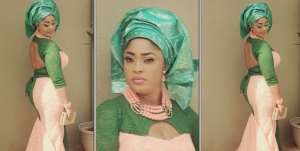 Sexy Yoruba actress, Biodun Okeowo better known in the industry as Tolani Oshirin, says the Nigerian youths today, needs God's intervention with the way of lives they are living.

The actress explained that the rate at which youths indulge in pre-marital s*x, is so saddening that women no longer respect their virginity.

“It is saddening that pre-marital sex has taken over our time. In the past, most of our men would disassociate themselves with girls who have been deflowered outside wedlock. Then a woman's virginity was her pride but time has changed and human beings have changed. I am not happy about it. Maybe we should blame civilisation or modernisation for this. I pray for God's intervention in this era,” she stated.

Biodun who is a single mother, further explained that in order for her to set good examples for her children, has tried not to act dirty or rough roles in movies.

“I have been working and thinking on that recently. My kids are growing fast and are very intelligent. For their sake, I am trying not to act dirty or rough, but at the same time I have to interpret my roles very well, especially if it is a movie I producing. I also censor the movies they watch, be it mine or other films. Acting is make-believe and there's this general belief that saddens my heart, and that is the belief that Nollywood does not deliver sexual roles well enough in graphic details. Our fans often forget that we are Africans, we have a culture that needs to be inculcated into our movies and that is what Biodun Okeowo is working on,” she noted.