Why I’m Not Married—Seun Kuti 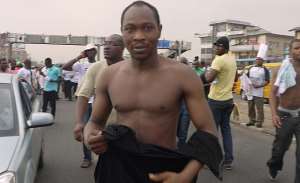 Son of Afrobeat legend, Fela Anikulapo-Kuti, Seun, has disclosed that he does not see marriage as an institution, which is why he is not yet married. The father of one from his baby mama said he does not know why parents file for divorce after bearing children, suggesting that there should be a law against the trend.

The singer turned activist also said that divorce psychologically affect the children and noted that if he is in position to make a law, he would make it mandatory for couples to file for divorce when their children turn 18.

"I am not married now because I don't believe in marriage as an institution but I am even more tired of those that use it to destroy the mentality of their own children. Children are strong and very fragile at the same time and they get their security from the type of relationship and foundations you establish with them.

“Before you divorce yourselves over every dumb little thing, can you please think about the effect on your child? Remove your selfish clothes and put on the garment of empathy. It really breaks the little ones and if I am ever in a position to decide legislation, it will be law that as long as a child has been brought into this world in a married institution; the said couple have to be married till the child is 18!

“I think people will then realize that children are more important than your ego! Love your kids people,” he said.

Do you agree with him?