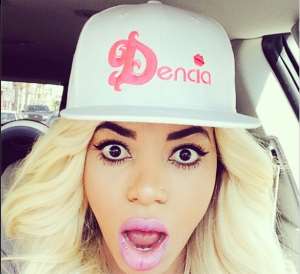 Singer Dencia, has promised the National Agency for Food And Drug Administration (NAFDAC) a law suit if they don't leave her alone with their proposed threat of arrest.

According to the singer who spoke through her representative, Lorenzo in Encomium Weekly, dimissed the threat, arguing that she could sue the agency boss, Paul Orhili for defamation.

The rep. argued that the 'Whitenicious cream,' is not a drug neither is it food and declined ever knowing Paul Orhili or of an arrest warrant.

“Whitenicious is not made in Nigeria and has no connections with Nigeria. Doesn't Nigeria have more problems than worry about Dencia?” she questioned.

When asked of her perception towards the arrest warrant, the rep. explained that “how do you arrest a US citizen? African leaders need to focus on Africa and stop joining the bandwagon for fame. When did the dark spot remover cause cancer? He better shut his mouth up before I file a lawsuit against him for defaming my client or her business and he will prove what he said.”