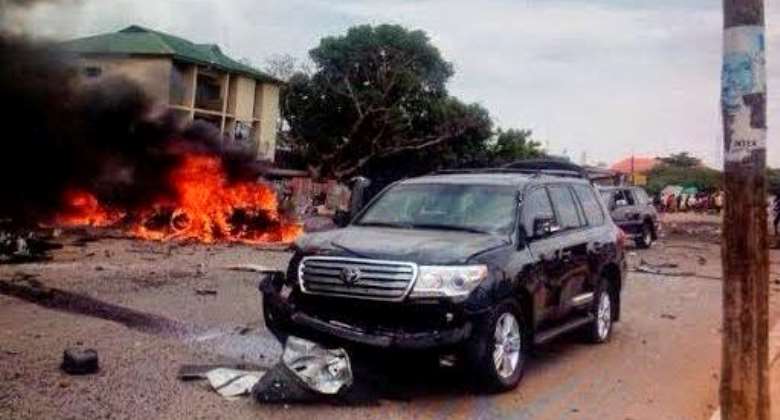 Almost 2 hours after the first bombing which killed at least 45, a second explosion ripped through the crowd targeting the convoy of General Buhari. General Buhari was the target of the second attack which took place in Kaduna today June 23rd.

One way or the other he left unhurt, but his body guards were injured.

“I was personally involved in a clearly targeted bomb attack today along Ali Akilu Road, Kawo-Kaduna at about 2:30pm on my way to Daura,” Mr. Buhari said.

“The unfortunate event, clearly an assassination attempt, came from a fast moving vehicle that made many attempts to overtake my security car but was blocked by my escort vehicle.

“We reached the market area of Kawo where he took advantage of our slowing down and attempted to ram my car and instantly detonated the bomb which destroyed all the three cars in our convoy,” Mr. Buhari said.

The former leader said when he came down from his vehicle, he saw many dead bodies littered around.

“They were innocent people going about their daily business who became victims of mass murder,” he said.

Following the 2 attacks, a 24 hour curfew has been declared in Kaduna.