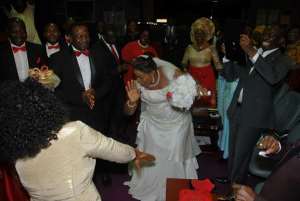 Recently, the entertainment industry was left with smiles and happiness as the talented singer got married to her longtime lover Honourable Justice Chudi Nwokorie, on Friday April 18, 2014.

Princess Anne was left shedding tears of joy as she was short of words to appreciate everyone that honoured the occasion.

According to her, “Good Friday Is The Day Christ Hung On The Cross And Declared It Is Finished. So That I Can Say, 'I Do" After! He Truly Makes All Things Beautiful In His”

From a humble background, Princess Anne Inyang dabbled into music when she was sent to live with her Aunt in Surulere, Lagos from her teens. That gave her the opportunity of listening to several musicals. She later formed an all-girl band known as G.4 and while rehearsing one day, they were discovered by a well-known personality in music. This was what gave her a break and she started singing jazz in his club from a very tender age.

Her lyrics changed when she gave her life to Christ and the first song she wrote is the popular song “Things are getting better”. Later she wrote, “God cannot lie”, “You are worthy Lord etc.” and the list began to grow.

The experience of having a live encounter with Christ in 1984 brought her to The Redeemed Evangelical Mission which was then abbreviated as The REM until she suggested the acronym TREM.

She studied Secretarial Administration, and later, Banking and Finance at Yaba College of Technology but because of the passion she has for touching lives through her inspiring songs, she quit banking in 1998 (First Bank of Nigeria Plc) and went into full time ministry and professional music.