Bride and Groom narrowly escape death while going for Honeymoon 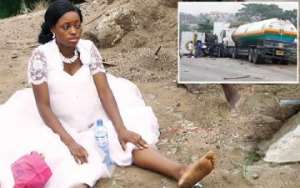 A newly wed couple narrowly escaped death on Saturday in an auto crash while on their way from their wedding reception to their honey moon destination. PUNCH reports thus:

“The accident involving a NNPC tanker with number plate XG 321 MKA, a cargo truck and two saloon cars happened at about 4: 45pm on Saturday, close to the Otedola bridge, Alausa, on Lagos/Ibadan Expressway.

Our reporter who witnessed the accident said the NNPC truck, while descending the slop from Alausa at top speed, could not hold its break. It then ran into the first car and squashed the second one against the cargo truck.

The bride and her husband were said to have jumped out of their car.

When our reporter got to the scene of the accident, the groom was no where in sight. The groom's elder sister who spoke to our reporter while cuddling her baby explained that they were just coming from the wedding reception of the couple.

She was seen kneeling down and thanking God for their escape but refused to give the name of the couple.

The fire coming out of the truck was put out by sympathisers as the tanker was carrying petroleum product. The accident also resulted in gridlock which was controlled by men of the Federal Road Safety Corps.”