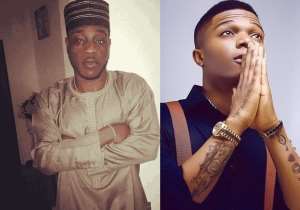 Information reaching us from some grapevines about the recently established record label by Wizkid, Starboi Records, seems not to be a very palatable one. There are rumour making the rounds that their is confusion already in the young label.

Recall that Wizzy, as Wizkid is also fondly called, floated his label during his reported 'fight' with his boss, Banky W, in which he was reported to have left EME label to form his label, until they both found a way to sought things out between each other.

After he formed his Starboi Records, Wizkid reportedly signed a new artiste, LAX and both released a song entitled 'Caro' which has gained massive airplays on both radio and TV stations across Africa.

The gist reaching us is that LAX is about to set up his own label. The reason for this, according to the rumour, is that Wizkid allegedly cheated him from the proceeds made from their hit song, 'Caro'.

LAX is now set to establish his own music label to be called SMR Entertainment, we were told.

Miss Nigeria 2013 Becomes Face Of Imo State: Names A Street After Her, Gives Her N0.5million