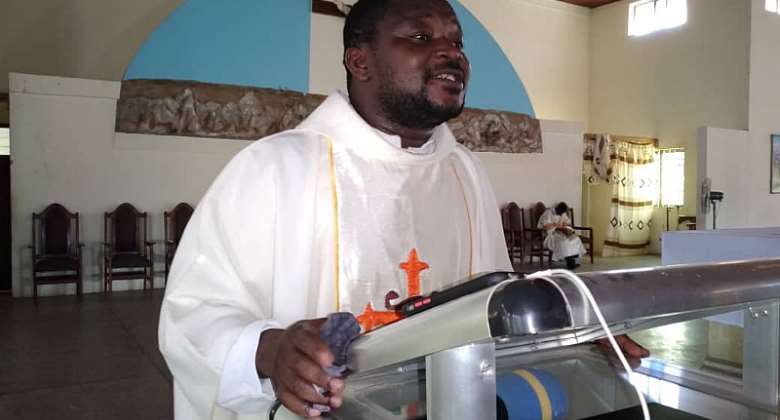 The battle against the novel COVID-19 pandemic has been described by a Catholic Priest, Rev. Fr. Gorden Nibeen, as the third world war humanity has to battle without nuclear weapons.

Fr. Nibeen disclosed that the throwback of the disease the world over is similar to the experiences of world war one and two.

He posited that in the previous world wars, it was countries against countries, but in today’s war, it is the entire world against an invisible disease.

According to him, the world needs good shepherds to lead the obedient sheep out of the pandemic.

The man of God made the observation in a live online sermon on Sunday, at the St.Anne’s Catholic cathedral at Damongo in the Savannah Region.

Fr. Nibeen said the children of God must pray just as they did in the previous world wars and look to Jesus as the good shepherd to touch the hearts of world leaders to steer them through this war.

Good Shepherd Sunday occurs on the fourth Sunday in the Easter Season. The name derives from the gospel reading for the day which is taken from the tenth chapter of John’s Gospel.

In this reading, Christ is described as the “Good Shepherd” who lays down his life for his sheep. The Psalm for the day is Psalm 22 which also makes use of shepherd imagery.

The day is marked by Catholics as the 4th Sunday of Easter or the good shepherd Sunday and also vocations Sunday.

Fr. Nibeen made known that on the said day, Christians are called to be bold just as Christ was in taking care of his flock.

“In this Third World War which has made it impossible for our leaders to seek treatment outside while we struggle with a poor health system they created here, we need to intensify our prayers for them,” he said.

“If this was an African disease, our leaders would have left us here and travelled abroad for treatments in hospitals established by other leaders. Now that every leader is locked down in his or her country and will have to rely on their own health systems no matter what they may fall sick of, I hope they will be good shepherds as Christ was and improve the health system of this country," he further disclosed.

Christians, Fr Nibeen counseled, must listen to our leaders as Jesus’ flock listened to him in this world war by heading to calls to stay at home, wash hands as directed, keeping social distances and all other protocols.

Practicing these and praying to Jesus the master good shepherd he said, is the surest way to win this war.

He prayed for God’s guidance and protection, the spirit of boldness for the youth to chose their vocations and the ears to listen and hear the voice of our shepherds in this war that has befallen all mankind.