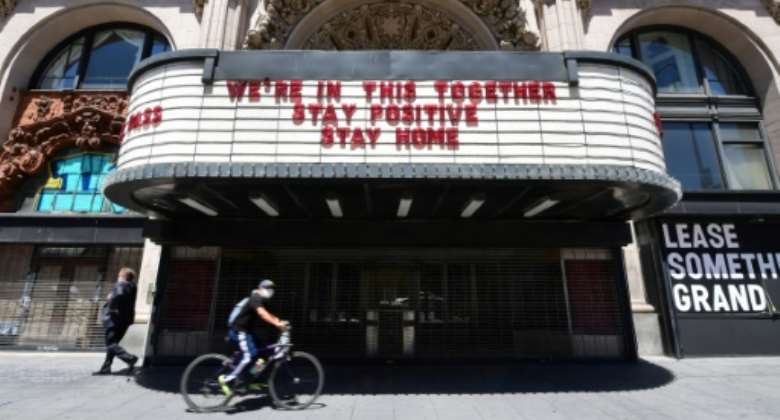 A Los Angeles cyclist in a face mask rides past the Million Dollar Theater, closed due to the coronavirus pandemic, with words on the marqee calling for togetherness. By Frederic J. BROWN (AFP)

An internal US government estimate forecast the daily COVID-19 death toll will almost double in the country by the end of May, as global leaders raised $8 billion on Monday toward efforts to develop a coronavirus vaccine.

Restaurants in Italy partially reopened and Germans queued for haircuts in a Europe edging gingerly out of lockdown, after the virus left more than 130,000 dead across the continent over the past four months.

Half of the planet has been under lockdown and much of the world remained cautious even as countries from India to Nigeria sought to ease some restrictions to allow businesses to remain afloat and workers to bring home income.

Not every country was showing as much confidence. The global coronavirus toll passed 250,000 Monday, and confirmed cases since the disease surfaced in China late last year rose to almost 3.6 million across 195 countries and territories.

Infections continued to surge in Russia, now adding more than 10,000 a day.

In Lagos, Nigeria, market traders underwent anti-coronavirus training to prepare for the lifting of the lockdown. By PIUS UTOMI EKPEI (AFP)

"The threat is apparently on the rise," Moscow mayor Sergei Sobyanin told citizens.

But the United States remains far more severely affected than any other nation.

An internal study by the US government's Centers for Disease Control and Prevention predicted that new coronavirus cases will surge more than eight-fold to 200,000 per day by June 1, and the toll could rise to 3,000 a day, up from the current 1,500-2,000.

That could more than double the number of US coronavirus deaths, now at about 68,000, over the next few months, according to the study first reported by The New York Times and The Washington Post.

That outlook was much more dire than forecasts by President Donald Trump's Coronavirus Task Force.

It underscored the tough, politically-tinged debate over reopening that pits Trump and his allies against many governors and community leaders worried that social distancing and quarantines need to remain in place longer.

The study suggested that the surge in infections could come from mid-May in states and localities that had not implemented tough distancing measures or were loosening up too early.

"There remains a large number of counties whose burden continues to grow or are in an elevated incidence plateau, including in the Great Lakes region, parts of the Southeast, Northeast, and around southern California," the study reportedly said.

An internal US forecast suggests that President Donald Trump might have downplayed the possibility of a surge in coronavirus infections and deaths in the coming weeks.. By POOL (GETTY IMAGES NORTH AMERICA/AFP)

The White House downplayed the CDC forecast as an "internal" document which had not been vetted by the task force, which is led by Vice President Mike Pence.

In Europe there was still caution as countries allowed people to return to the streets and some businesses to open up. But governments believe they have passed the peak of the disease with death tolls in Europe's worst affected countries having dropped as a result of nearly two months of confinement.

"We are feeling a mix of joy and fear," 40-year-old Stefano Milano said in Rome as Italian restaurants reopened for takeaway orders -- though bars and ice cream parlours will remain shut.

Spain and Portugal made face masks mandatory on public transport starting Monday as they further eased their lockdowns.

World map showing official number of coronavirus deaths per country, as of May 4 at 1900 GMT. By Simon MALFATTO (AFP)

A special telethon backed by the World Health Organization but snubbed by Washington pulled in 7.4 billion euros ($8.1 billion) to support international efforts to develop and manufacture a vaccine to slow the coronavirus spread.

Leaders of major European powers, Japan and Canada made the biggest pledges, along with philanthropists including Bill and Melinda Gates, at the videoconference hosted by European Commission chief Ursula von der Leyen.

They called for cooperation and not competition in the search for a cure that could not only be potentially lucrative but also spark fights over who gets access to a vaccine first.

"This was a powerful and inspiring demonstration of global solidarity," WHO chief Tedros Adhanom Ghebreyesus said of the donations.

Seeming to defend its non-participation, the US State Department issued a statement declaring that the United States is "leading" the global response to the COVID-19 pandemic, and said it has spent more than $1 billion together with US drug companies to work on a vaccine.

Trump claimed Sunday that the United States will have a coronavirus vaccine ready by the end of the year.

The war of words between the United States and China over responsibility for the pandemic continued, with China's state broadcaster attacking US Secretary of State Mike Pompeo for "insane" remarks in which he said the virus originated at a laboratory in Wuhan, the city where the pandemic first emerged.

The WHO said it had received no evidence on the "speculative" Wuhan lab claims.

Your attack on our 'cease and desist' letter strains free ex...
17 minutes ago