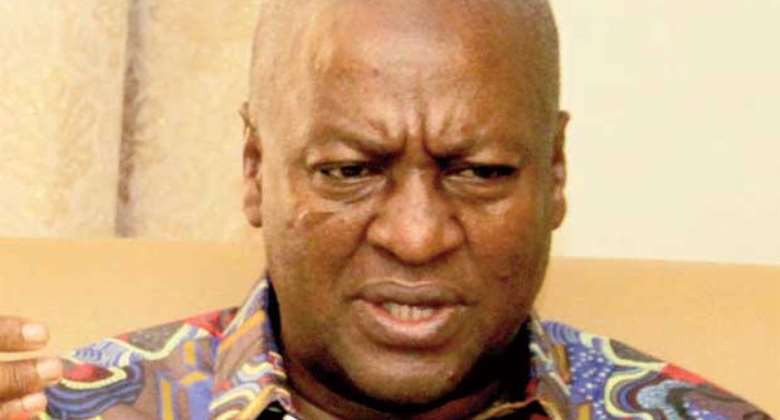 I salute you all, fellow Ghanaians, and my worldwide fans and the general public. Today, Monday, 4 May 2020, I have decided to avail myself of the opportunity offered by former President John Dramani Mahama, who has ample time on his hands, even in the midst of Ghana finding herself in a global outbreak of a mercilessly, indiscriminatorily deadly disease, thus novel coronavirus (Covid-19), to frequent the Facebook to grant live “Questions and Answers” session interviews to the general public.

Some Ghanaians, including the President of sorry to say, the “Ghana standard”, but not the internationally acceptable standard, think tank, called IMANI Ghana, Franklin Cudjoe, do greatly admire and appreciate the method adopted by former President John Dramani Mahama to interact with the Ghanaian public hence inviting President Nana Akufo-Addo, to do same, by freeing himself from serious engagements to seeking solutions to contain and combat the spread of Covid-19, to rather go on live social media to grant “Questions and Answers” sessions.

Sadly to say, it is only a person with a bird’s brain in his head that will advise a sitting president hectically involved in a search for solutions to fighting and conquering a lethal disease come to kill many in the world including the citizens of his own country, to cease those endeavours to rather frequent the social media to grant live interviews to the public, in what is a political campaign in disguise.

Anyway, it is said “Opinions are like noses; everybody has one”. We cannot all express the same opinion at the same time but differently, so are noses of which some are big, slim, beautiful, ugly, etc., but they are all acceptable as befitting the face of any individual having it according as apportioned to them. Therefore, Franklin Cudjoe and all his ilk are entitled to freely express their opinions no matter how one deems the timing and such expressions unfortunate or else, the saying above will never come across truthful.

In order not to beat about the bush but to hit the nail right in the head, let me put my pertinent questions to former President John Mahama of which I require correct answers from him. They are questions directed at him so they will be posed as such.

1. Would you accept that you are incapable of taking tangible decisions as inferred from your own written confession that you have never been able take any rational decisions of, and on, your own, since your birth or infancy? If yes, what has been the inhibiting factor and how have you been planning to overcome it?

2. Is a person incapable of, and unable to, take intelligent decisions, fit to lead his nation and expect to deliver good results appreciable to the majority of the citizens who happen to be discerning rather than those who are equally as unintelligent as he?

3. Do you see yourself as the president of Ghana or a president-in-waiting? This question is asked based on the fact that in the eyes of many a discerning Ghanaian, you are running a parallel policy with a parallel team to addressing the containment of the spread of the Covid-19? What has informed your decision to do that and how do you explain it since you are the first person of its kind of former presidents and presidential-aspirants doing that in the whole world without any former president in the world seen to be emulating you? You are running a parallel government in Ghana if I should be frank with you, is that right or sensible?

4. Are you not a hypocrite to inform Ghanaians, and to accuse, His Excellency the President, Nana Addo Dankwa Akufo-Addo, of, running to the International Monetary Fund (IMF) for monetary assistance to fight the Covid-19 pandemic? What was your reason for doing that? Is it a “tit for tat” because several Ghanaians had accused you of mismanaging the Ghana economy, getting it broke, and then hurtling to the IMF for bailout fund with harsh conditionalities attached?

5. Did the IMF invite African countries to avail themselves of monetary help to fight the pandemic Covid-19 without any conditionality attached unlike yours, or the African leaders ran to the IMF for help with harsh conditionality attached as it was in your case? Or, the fact that IMF is involved, regardless of how and why, President Nana Akufo-Addo has taken Ghana to the IMF so he has done exactly as you did? By the way, do you subscribe to the hilarious saying that, “Whether Prophet Mohammed went to the mountain or the mountain went to Prophet Mohammed, there is always a WENT”, to justify the fact that both of you (yourself and President Nana Akufo-Addo), have at some point been to the IMF for help without any relevance to how, when and why it was done?

6. In your view, is there any visionary difference between planting trees in the biting harmattan or dry season time in the northern regions of Ghana and constructing dams or dugouts in the same area to provide the people with access to potable water and water for irrigation purposes all year round? None of the trees survived but all withered away despite a huge capital outlay of thirty-three million Ghana New Cedis (GHS33,000,000) going into it. Some of the dugouts as some Ghanaians teasingly call the “One Village One Dam” policy by President Nana Akufo-Addo still do exist and are functioning, right?

7. Who in your view, Mr Former President, would be “an elected government official one” in any nation, especially in Ghana, with the ability to issue a finality to a national contract of huge strategic significance? Could he be Rockson Adofo, an ordinary person in the street but has aversion to official corruption and hatred for myopic but bullies in the form of traditional overlords, corrupt politicians, corrupt court judges and unprofessional law enforcement agents?

8. Were you ever involved in the discussion, negotiation and signing of the Airbus contract that led to Ghana purchasing military aircrafts for its army during your tenure of office as the Vice President or President of Ghana? If yes, how, and if no, who issued the finality to purchasing the aircrafts if you knew?

9. Why do you want to stage a comeback for the presidency? What are your motivating factors? Will you be able to resolve any national crisis creditably should there be one like the infamous nationwide power outage (dumsor) that you could not deal with for years, but left to become an international scar on the image of Ghana under your presidency? It is still fresh in the minds of many a sensible Ghanaian and reminds them of how incompetent you were and could always be. How do you react to this?

.
10. You claimed not to listen to the advice of anyone who had never ascended to the presidency of Ghana before hence the lyrics of the popular and famous Ghanaian musician, Charles Kwadwo Fosu, alias Dada Lumba’s song, “Yen ntie Obiaa”, becoming your favourite pastime song you so relished in, both in listening, and dancing, to. How do you see yourself to be entrusted with power if you were not going to listen to the Ghanaian electorate? If you will this time around listen to Ghanaians who have never become president of Ghana before, what has made you rescind your once naive decision not to listen to Ghanaians although they elected you to power?

11. Have you ever been corrupt in your life as a holder of public office in Ghana or as an ordinary person anywhere in the world? By corrupt here I mean taking any public money you are not genuinely due for and/or abusing your position to influence a decision in favour of anyone because of the person being your friend, family member or your party faithful? I put it to you that you got yourself involved in the ongoing Kumawu chieftaincy dispute in favour of Asantehene Otumfuo Osei Tutu II in attempts to influence decision in his favour contrary to the facts and evidence available? Did you not summon former Inspector General of Police, Mr Kudalor, to your office in the presence of Asantehene Otumfuo Osei Tutu II in attempts to get him to use the police to intimidate Kumawuman citizens opposed to Asantehene’s criminal and abusive involvements in the ongoing Kumawu chieftaincy dispute for his selfish quests contrary to prevailing Asante, and especially, Kumawu conventions?

12. The last but not the least, are people like Kevin Ekow Baidoo Taylor and Kwame Asare, alias A-Plus, on your payroll for any reason? Have you ever parted with any amount of money, regardless of how big or small, to them, and if yes, how, why and when?

Mr former President John Dramani Mahama, please let the Holy Ghost be your Prosecutor, Jesus Christ your Witness, and God your Judge with Sammy Gyamfi being your lawyer when answering all the above posed questions. Although the three Heavenly beings are too patient to react to punishing sinners and liars, unlike the mortal being nominated to be your lawyer, any lies you tell will be held against you by God, Jesus Christ and the Holy Ghost. I want nothing but truthful answers from you.

I shall be back with more questions as and when needed.