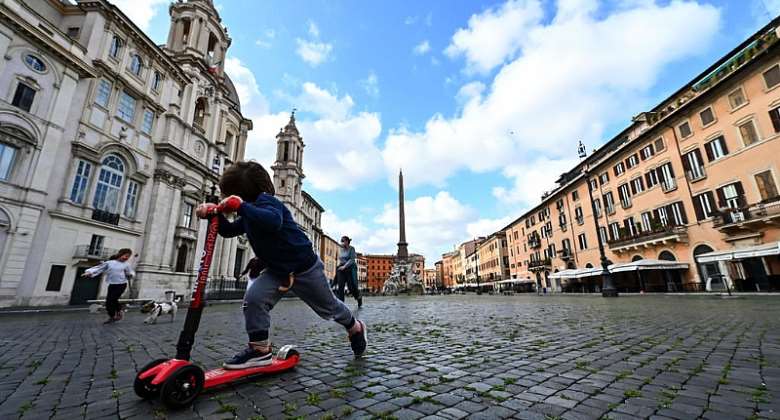 Italy is among several countries beginning to lift restrictive measures, after registering the lowest daily number of coronavirus-related deaths since its lockdown began two months ago. The national death toll stood at 29,079 on Monday – second only to the US where nearly 69,000 people have died.

Italy reported 174 deaths in the 24-hour period ending Sunday evening – a two-month low for the country.

Both the numbers of new infections and patients in intensive care have continued to fall, according to health authorities.

The country is relaxing its lockdown from Monday, when Italians will be able to resume some activities which have been banned since 10 March.

"Tomorrow phase 2 of the emergency will begin, that of coexistence with the virus. It will be a new page that we will all have to write together, with confidence and responsibility," he wrote on Twitter.

Exercise will be tolerated, as long as people respect rules on maintaining physical distance.

Public gardens and parks will re-open but children's play equipment will be off limits.

Close family only, no friends

Italians will also be able to visit relatives – but not friends – within their region.

Gatherings in large groups are still prohibited.
Manufacturing and construction sites are set to start back on Monday, sectors which employ some four million people, mostly men.

However, schools, cinemas and most shops will remain closed.

Bars and restaurants are due to start allowing customers to sit at tables in June and in the meantime can operate take-away services if they follow strict hygiene rules.

In Rome and the Lazio region, face masks must be worn in enclosed public spaces, including shops and on public transport.

Masks are to be worn on streets only when it is not possible to maintain a one-metre distance from others.

Public transport in the capital will resume but with a 50 percent capacity in terms of seating.

Funerals will be allowed, but with only 15 people allowed to attend.

There has been some confusion as to how listing the lockdown will be managed seeing as the highly decentralised system allows the country's 20 regions to apply their own rules.

Beaches to open in the south

Venice's Veneto and the southern Calabria regions have thus been serving food and drink at bars and restaurants with outdoor seating since last week.

The area around Genoa is thinking of allowing small groups of people to go sailing and reopening its beaches, while neighbouring Emilia-Romagna is keeping them closed.

Last week, Prime Minister Conte, who has remained high in opinion polls for his handling of the crisis, apologised via a message on Facebook for the delay in financial aid promised by the government to help households and small businesses worth around €3.3billion.