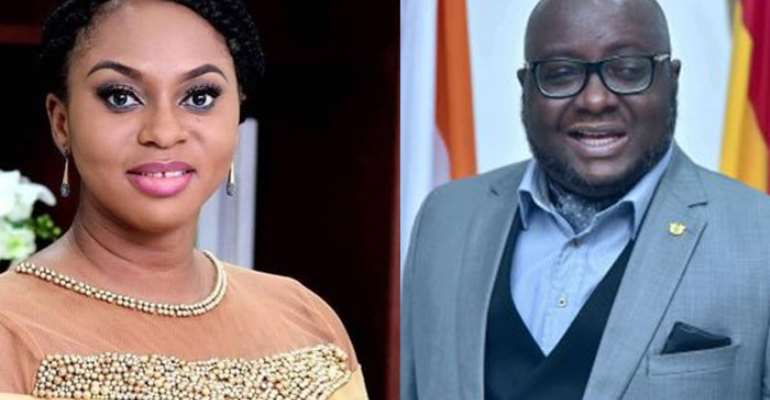 There appears to be a bloody fight between incumbent Member of Parliament for Dome-Kwabenya, Sarah Adwoa-Safo and her tough contender for the NPP parliamentary ticket, Mike Oquaye Jnr.

Adwoa Safo in a media report had purportedly issued a public plea to the New Patriotic Party (NPP) national executive to step into an ongoing fracas that has engulfed the Constituency ahead of the parliamentary primary.

“The national party, the MP warned, need to call for an order before the chaos that has erupted in the constituency leads to fatalities”, media reports had quoted.

Sarah Adwoa Safo, who is facing stiff competition from Ghana's High Commissioner to India is lamenting that her life is in danger.

She accordingly stated that an attempt on her person last week backfired when assailants who thought she was in the Constituency Chairman's residence, launched an assault on the house.

But a release by the Communications Team of Mike Oquaye Jnr is rubbishing the claims.

It says the claims are false, stating emphatically that “false propaganda and lies does not win elections.”

“Our attention has been drawn to a false publication in a newspaper called The Ghanaian Publisher with the caption on its banner headline “Oquaye's Son Is After My Life- Adwoa Safo”.”

“We wish to state clearly that, the said publication is false and must be treated with the contempt it deserves,” the release said.

” Some unscrupulous people have resorted to use social media as well as print and electronic media to denigrate the name of the Oquaye's as far as this Parliamentary Election is concerned in Dome Kwabenya Constituency of the New Patriotic Party.”

” The said publication which was read to the listeners of Peace fm radio network this morning in their newspaper review (in local language twi) by one of the reviewers said supporters of Oquaye Junior had besieged the house of the Constituency Chairman for NPP Dome Kwabenya and had arrived at the house with stones and clubs.”

“How can a scuffle which ensued at the house of the Chairman over a snatched album by a supporter of Adwoa be construed as a threat to her life?,” it quizzed.

“Did the album snatcher not say to the Regional police commander that he took the album to the Chairman's house after he snatched it?”

“If this is so then when did this connection emanate from one whole week after the incident? This is propaganda, pure and simple,” the statement said.