A day of Ramadan in Mali during coronavirus 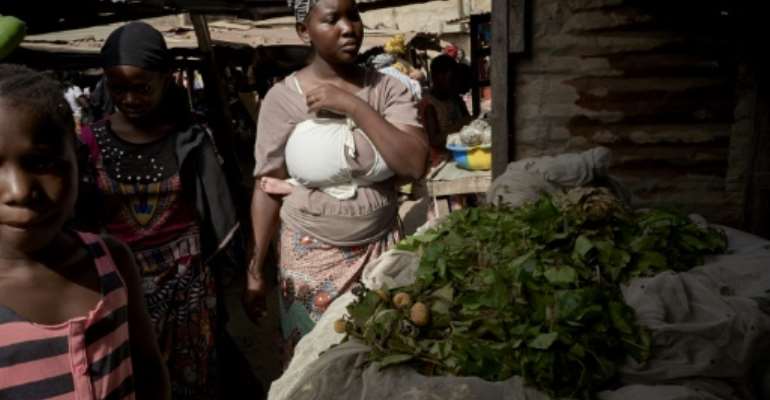 Fatoumata Sinaba rised at 4am to prepare her family for a day of fast before heading to the market to buy vegetables for the Iftar. By MICHELE CATTANI (AFP)

Fatoumata is one of the first to get up in the darkness. It's 4:00 am and in the Malian capital of Bamako, the 18 members of the Sinaba family are gradually preparing to greet the day.

The young woman, the mother of a small child, lights the fire to heat rice left over from the previous day before the start of the fasting. Her brother, Solo, in his 20s, grumbles. He eats in silence, his eyes glued to his portable phone and social media.

"Five o'clock. The muezzin will sound in just 12 minutes."

Once the muezzin's call has resounded, 10 family members will have to wait until the end of the day to drink and eat again during the holy fasting month of Ramadan. The great-grandmother and the youngest children need not take part, under Islamic principles.

During the day, the sun beats down and the faithful will have to deal with temperatures that can reach beyond 40 degrees Celsius (104 degrees Fahrenheit).

In Mali, more than 560 people have tested positive for COVID-19, of whom 27 have died, but hardly anyone mentions the coronavirus in the Sinaba household, as in many middle-class families. 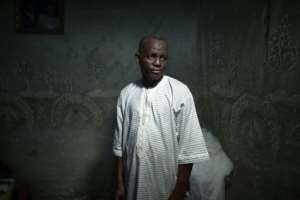 Mahamadou Sinaba is a civil servant at a ministry where life has been turned upside down by coronavirus. By MICHELE CATTANI (AFP)

Nevertheless, activity at the ministry where Mahamadou Sinaba is a civil servant has been turned upside down. Other family members sell ice cream or are training to be electricians.

Despite quarantine restrictions, the pandemic seems to be having only a minimal effect on day-to-day life in this country ravaged by strife and poverty.

"There was death before the coronavirus. There will be death after it," Moussa Sinaba says philosophically on the way to the mosque. 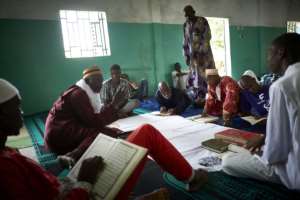 In Mali the mosques have remained open during Ramadan leaving the faithful free to gather and read the Quran. By MICHELE CATTANI (AFP)

Unlike other countries, Mali has not shuttered its mosques, and religious gatherings at close quarters have led to angry debate.

The sun rises slowly. Mahamadou Sinaba grabs his phone and goes to sit on a rock overlooking the Niger River, a few dozen metres (yards) from the house.

With a faraway gaze, he listens in silence to a crackly radio broadcast while other old men from the district settle around him.

The foreign news was full of tensions between China and US President Donald Trump, while the big story at home was the second round of long-delayed parliamentary elections held on April 19, despite the risks of jihadist violence, ethnic clashes and a pandemic.

It was still early morning when a breeze came up. "This is the best time of the day," Mahamadou smiled.

Behind him, two of his daughters are washing the dishes in the river and a couple of children brush their teeth, feet in the water. One constant in daily life is that the women of the household will get on with preparing meals.

Everybody soon returns to the courtyard of the house. The mattresses the family used to sleep out of doors because of the stifling heat inside have been put away, along with the mosquito nets. 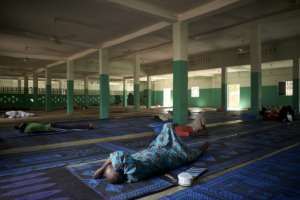 Rest is important during the holy month of Ramadan, even in the mosque. By MICHELE CATTANI (AFP)

Lethargy takes hold with the mounting heat, but women toil at the cooking and going to the market, which remains open despite the health crisis. The men are either at work or gathered in groups, for their endless discussions.

Mats and chairs are installed in the shade of a grand old tree in the centre of the courtyard. People who have not drifted off are chatting.

"Our Ramadan is a family affair. From the great-grandmother to the baby, we're together," the patriarch says with pride. 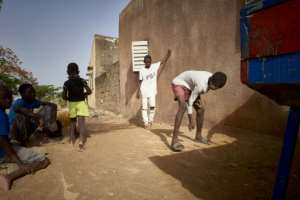 With the schools closed, Malian children find other diversions like marbles to pass the time. By MICHELE CATTANI (AFP)

Loud cries punctuate the settled calm. In the time of coronavirus, Ramadan remains a time for the young ones, whose schools have been closed. Small kids race from courtyard to courtyard in their dozens, playing marbles and chasing each other.

The notion of social distancing gains no traction here. "How could we manage that in our context?" asks Fatoumata Sinaba.

"Coronavirus is something people talk about, but we haven't seen anybody with it in this district," adds Souda, Mahamadou Sinaba's wife.

Souda objects to the curfew that prevents her from going out to sell braised fish in the evening. "That's the only impact of the corona I see around here," she smiles.

During prayers at 1:00 pm, the local mosque was packed, but in his family, Mahamadou Sinaba was the only one to wear a mask. "God is there for us," he declares, "but that doesn't prevent us from protecting ourselves!" 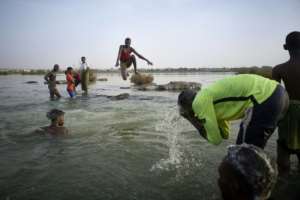 Malian children freshen up in the cool waters of the Niger River before breaking the fast. By MICHELE CATTANI (AFP)

Mostly stretched out on the floor, some men listened attentively to the preaching of the imam, while others dozed.

By around 4:00 pm, people become itchy for sunset. Children flock to the river to play, splash and show off their somersaults. The air in the district lightens up and people break into smiles, knowing that their daylong fast will soon be over.

At 6:45 pm, the family is ready in the courtyard. The dates have been pitted and glasses are filled with the juices of ginger and kinkeliba, a west African plant used in herbal tea and for a range of medicinal purposes. 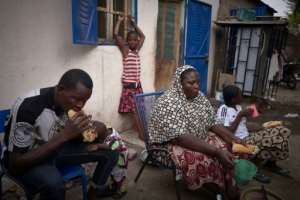 Members of the Sinaba family sttle down for Iftar, the evening meal that breaks the fast after the sunset. By MICHELE CATTANI (AFP)

At 6:47 pm, the voice of the muezzin rings out. The hour has come and the family can begin iftar — breaking the fast together.