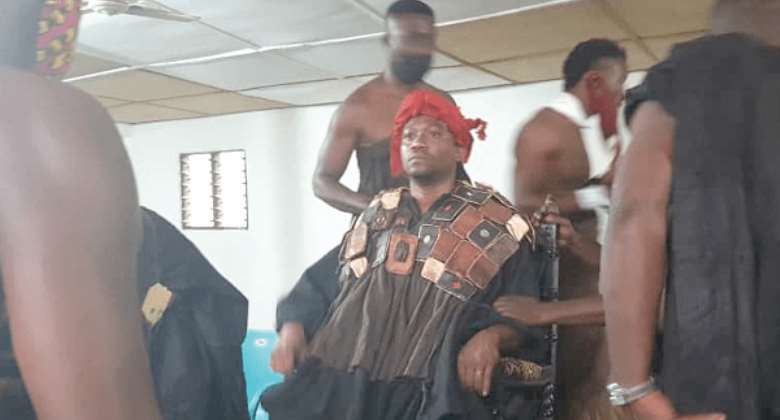 A short but historic ceremony to install a new paramount chief for the Akuapem Traditional Area was held yesterday in the ancient town of Akropong, the traditional capital of Akuapem.

Oseadeeyo Akuffo II is a graduate of the WestChester Community College, Val Halla, New York and an old student of the Presbyterian Boys Senior High School, Legon in Accra.

The process to install the new chief was fast-tracked after the Judicial Committee of the Eastern Regional House of Chiefs ruled last Thursday on the Akuapem chieftaincy dispute to end years of litigation between two factions over who was to be rightfully installed the next chief of Akuapem.

There was tight security on the occasion to ensure adherence to social distancing and to make sure a large crowd did not gather. The process of installation involving introduction of the new chief to the divisional chiefs and his acceptance by them, and swearing of allegiance to the Akuapem state lasted one and half hours.

Divisional chiefs
After five years of being without a chief, the people of Akropong and indeed the whole of the Akuapem Traditional Area had eagerly looked forward to this day.

However, the pomp and ceremony normally associated with such occasions could not take place due to the COVID-19 pandemic and the ban on social and public gatherings.

Under the circumstance, attendance at the ceremony was highly restrictive and controlled by national security to ensure there was strict adherence to the social distancing protocol.

Conspicuously absent were the Okuapehemaa, Nana Afua Nketiaa Obuo II, and Akuapem Asonahene, Nana Kwasi Omenako II, who belong to the other faction in the chieftaincy dispute.

Ceremony
Before the Gyasehene, Nana Kwatia II presented the new chief to the assembly of chiefs, the Adontenhen, Otoobour Djan Kwasi II, enquired of the whereabouts of the Okuapehemaa and Asonahene.

The Gyasehene said two chiefs might have decided not to be part of the ceremony considering the difficulties that had characterised the nomination, selection and processes for installing the new chief. Nonetheless, he said the two chiefs were key to the chieftaincy institution in Akuapem and so steps would be taken to bring them on board.

The Adontenhene then told the Gyaasehene that since the processes for installing an Okuapehene were not done in a day but the kingmakers wanted them fast-tracked, certain rites had to be performed.

Accordingly, on behalf of the kingmakers the Gyaasehene agreed and presented a ram, bottles of Schnapps and an amount of money after which he introduced the new chief and the stool name he is to be called - Oseadeeyo Kwasi Akuffo Ababio II.

The divisional chiefs accepted the offer of pacification and consented to the new chief to swear the oath of allegiance.

Oseadeeyo Kwasi Akuffo Ababio then took his first steps as paramount chief before the divisional chiefs after which he engaged in some traditional dance. The chiefs then ordered for the ram to be slaughtered and libation performed to signify their acceptance of him as overlord. The divisional chiefs followed up by individually swearing the oath of allegiance to the new Okuapehene.

In his inaugural speech, Oseadeeyo Akuffo II expressed his appreciation to the people of the Akuapem Traditional Area for their support and pledged to be a chief for all.

He called for support and cooperation from the people to help him rule successfully.

He said even though he was young, he had learnt the processes, rites, norms, culture and nuances of the Great Ofori Kuma stool, adding that, “I hope one day to become a great chief like my predecessors and some of you Nananom who have been leading our people for decades.”

Otoobour Djan Kwasi II asked the people to put the past behind them and rally behind Oseadeeyo Akuffo II.

He said the traditions and culture that took place had been with a difference and it was the only way that the traditional authority could surmount the challenges it faced. He urged all the factions to come together to work in unity for the development of the traditional area.

Grand durbar
Even though there was tight security, many people observed the proceedings from outside their homes.

A number of people the Daily Graphic spoke to said they were happy that there was a paramount chief now and were waiting for the ban on public gathering to be lifted to celebrate in a grand style.

An elderly woman called Obaapanyin Agyeibea, said it was both a feeling of joy and sadness for her because Oseadeeyo Ababio II’s mother was not alive to witness the day. “But we are happy that finally we have a paramount chief to lead us.”

Ruling
In a ruling last Thursday, the three-member committee of the Eastern Regional House of Chiefs said the selectee for the Okuapehene stool by the Okuapehemaa, Nana Nketiaa Obuo II, was against the laid down custom and traditions of the people of Akuapem.

It further held that per the traditions and custom of Akuapem, it was the Abrewatia of the Sakyiabea Royal Family that had the mandate to select a nominee for the position of Okuapehene.

The committee, chaired by Nene Sackitey, the Konor of Manya Krobo, held that there was no proof that the installation of Odehyee Kwasi Akuffo by the queenmother was done with the involvement of the Abrewatia.

The Akuapem chieftaincy dispute begun about three years ago following a misunderstanding between factions in the Sakyiabea Royal Gate over whose turn it was to produce the next Okuapehene.