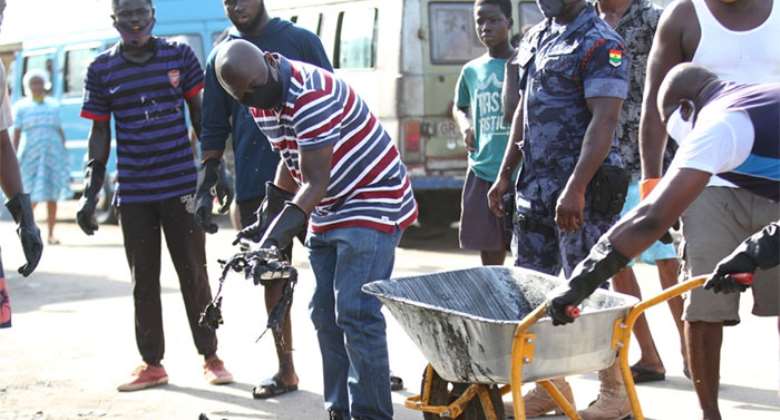 The Works and Housing Minister, Samuel Atta-Akyea, has inspected the de-silting of gutters exercise in flood-prone areas in Accra.

The minister, during the visit, charged communities in such areas to be actively involved in the de-choking of gutters in their areas as the country awaits the onset of this year's rainy season, which has been forecast to be slightly above normal by the Ghana Meteorological Agency.

Such an involvement, he stressed, would be an effective precaution against flooding in the event of heavy downpours.

This year's exercise is collaboration between the ministries of Works and Housing, Local Government and Rural Development, Sanitation and Water Resources, Dredge Masters, Zoomlion Ghana Limited, and all the assemblies in Accra.

They are making sure that the devastating effects of annual flooding of some parts of Accra are controlled, and also to ensure the free-flow of rainwater.

The highlight of the Chorkor Chemuna visit by the dignitaries was when Mr. Atta-Akyea and the Member of Parliament (MP) for the constituency, Dr. Alfred Okoe Vanderpuijie, the Mayor of Accra, and Dr. Siaw Agyepong jointly de-silted the heavily choked drainage in there.

It was a spectacular scene which expectedly attracted the attention of residents of the area as they looked on in awe.

Addressing journalists at the end of the exercise, the minister expressed concern about the indifference of some residents to bad state of drainage. He observed that the tendency to create filth and tipping same into nearby gutters and drains is worrying.

He described it as a bad habit and said it comes back to punish those who indulge in it in the form of mosquitoes, dysentery and diarrhea.

The minister, while advocating a permanent solution to the perennial flooding, said the country should consider a subterranean drainage system as opposed to the open drains, something which we inherited from the colonial era.

“It is a hugely capital-intensive project but we do not have a choice,” he said, adding that such a project would demand going to the capital/bond market to raise about US$10 billion to undertake it.

“I am of the humble view that in the long-run constructing subterranean drains would pay off instead of the country having to pay money for the yearly de-silting of drains and gutters,” he said.

On his part, the mayor of Accra advised residents to show 'positive attitudes' towards the environment, warning them of the enforcement of the relevant by-laws to punish recalcitrant residents.

He said they were working to restore the destroyed footbridge across the Chemu Lagoon with a concrete bridge.