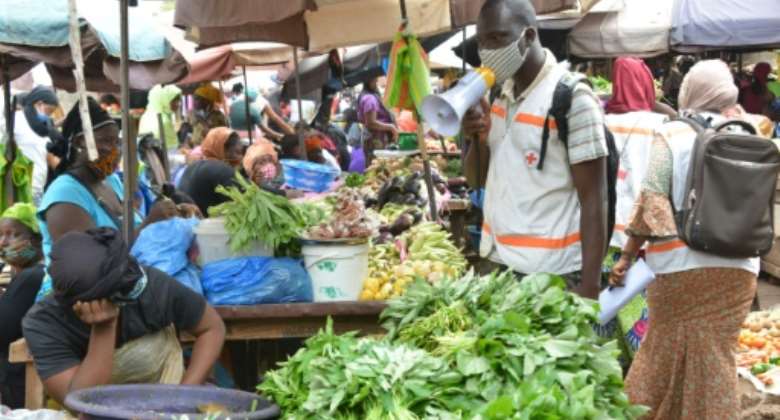 The defiant mood is deepened by the need to make a living. At a Conakry market, the Red Cross spreads the word on fighting the virus. By CELLOU BINANI (AFP)

Far from pulling together in the face of the COVID-19 pandemic, Guineans remain embittered by a deadly, months-long political crisis, hampering efforts to contain the virus in the poor West African state.

"The government banning something is all it takes for the people to reject it," said Hamidou Traore, a doctor at the capital Conakry's biggest hospital.

Mass demonstrations broke out in Guinea last October over suspicions that President Alpha Conde was planning constitutional changes that would allow him to extend his long rule.

Dozens were killed, and deep distrust in the government persists.

Guinea, one of the world's poorest countries, is among the hardest hit in the region by the pandemic, which has so far infected some 1,500 and killed seven.

The former French colony can little afford the political malaise in addition to a sorely deficient health system, with Guinea's main hospital, under renovation for the past four years, having to reopen suddenly at the onset of the pandemic.

And yet Guinea has first-hand experience with infectious diseases, having been ravaged by Ebola between late 2013 and 2016. More than 2,500 people died of the hemorrhagic fever.

Despite still raw memories of that epidemic, Guineans are loath to comply with restrictions urged by Conde and his government.

Grinding poverty, the need to go outdoors to make a living, and sheer fatalism add to the defiance.

The government has imposed a nighttime curfew, closed Guinea's borders, banned gatherings and made mask-wearing compulsory.

In Conakry, Fatoumata Mbo has seven workers turning out coloured masks in the stifling heat of her sewing shop, one of hundreds in the city. "I get lots of orders (from) businesses and charities," the young woman said.

As during the Ebola epidemic, buckets of water have reappeared in the streets to encourage hand-washing -- a minimum of hygiene.

Conde meanwhile has announced a 243 million euro ($267 million) plan to shore up the economy and to help those most in need.

Prominent politicians including ministers and high-ranking civil servants have been infected, leaving ordinary people to think that "the disease favours the elite", Barry said.

The head of the electoral commission died of COVID-19 two days after the results of the March 22 vote results were announced.

Many suspect that the country's jet set imported the virus to the country.

Conde went ahead with the constitutional referendum and legislative elections on March 22 despite the appearance of the virus and international condemnation.

The opposition says he directly contributed to the spread of the virus to serve his own interests.

The umbrella opposition grouping FNDC has agreed to suspend the protests, but it fears the president sees an opening to consolidate its power.

The FNDC, which said Sunday that 287 of its officials and members are in prison, has gone before the International Criminal Court over the pre-election crackdown.

The pandemic has not stopped arbitrary arrests, brutality and even looting by the security forces, according to Human Rights Watch.

'Abuses by the security forces are fuelling an already deep-seated distrust of the authorities, adding an obstacle to the fight against COVID-19,' said senior HRW Africa researcher Ilaria Allegrozzi on the group's website.

The crisis has also fuelled fears that it will facilitate corruption. "Corona business has replaced Ebola business," said Ousmane Kaba, head of the opposition Party of Democrats for Hope.

For his part Bouna Yattassaye, who heads Guinea's health agency, says the experience with Ebola had benefitted the country, with treatment centres reactivated in remote parts of the country.

But he said he feared that because of the political tensions, "health measures will not gain acceptance."