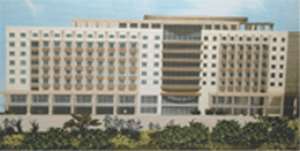 The Ambassador Hotel, which was the pride of the nation at independence but which has deteriorated over the years, is being given a new lease of life with a more than $100 million investment.

President J.A. Kufuor yesterday laid the foundation stone for work to begin on the construction of the new Ambassador Hotel in Accra.

The first phase of the project, involving the construction of the hotel building itself, is scheduled to be completed in August 2008.

On completion, the Five-Star hotel will be equipped with facilities including conference rooms, a business centre, boutiques, a health bazaar, parking lots, showrooms, presidential and executive suites.

The new hotel, which is a joint venture between Prince Alwaleed Bin Talal Bin Abdul Aziz al-Saud, one of the world's wealthiest businessmen, and the government, will be known as Movenpick Ambassador Hotel and it will be operated and managed by Movenpick Hotel and Resort, a world acclaimed hotel management chain.

The Ambassador Hotel, once a national heritage, was built and presented to Ghana by the United Kingdom as a gift on the attainment of independence in 1957 but it degenerated over the years until it was disposed of by the state.

Speaking just before he invited the Saudi Prince and investor to join him to lay the foundation stone for the project, President Kufuor said the Ambassador Hotel began to degenerate after just a decade of operation, saying that sad trend continued till the state disposed of it in a very doubtful sale about two decades ago.

The President said the purported buyers obviously had neither the resources nor the entrepreneurial competence to restore and manage such a historical asset.

“Thus, what should have been a cherished national heritage was shamefully and corruptly transacted into total collapse,” he stated.

President Kufuor said he was hopeful that the new Ambassador Hotel would come to mirror the renewed vision of the nation to attain the “Golden Age of Business”.

He said given the stature of the Saudi Prince in the world of business, his partnership with Ghana should signify to other investors everywhere that Ghana was truly the place to invest.

Prince al-Saud gave the assurance that he would do his best to preserve the Ambassador Hotel as a national heritage and said the construction and operation of the project would be carried out as a priority.

“We are looking forward to more co-operation with Ghana under the leadership of President Kufuor,” he stated.
Earlier in the day, the government honoured Prince al-Saud for his exemplary contribution to the development of the country.

President Kufuor conferred on the Saudi Prince the highest honour of Companion of the Order of the Volta at the Castle, Osu, yesterday.

It said Prince al-Saud, who holds several doctorate degrees, had an annual donation portfolio of $150 million.
During his visit to Ghana in 2003 and 2005, the Saudi Prince donated $1million to support education and health delivery in the country.