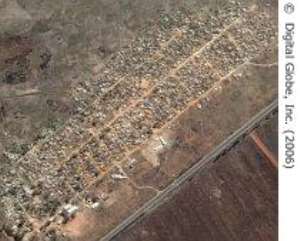 Amnesty International has released satellite images of the destruction of a large community in Zimbabwe, saying they provide the clearest possible evidence to date of the devastating impact of the Zimbabwean governments demolition of homes.

The human rights body released the before and after satellite images of what used to be the Porta Farm informal settlement about 30 kilometres west of Harare.

The settlement that housed thousands of poor Zimbabweans was razed during what the government called "Operation Drive Out the Filth", a wholesale destruction of unapproved homes and informal businesses. The after image taken in April shows an overgrown piece of land in place of the densely built up settlement.

The Porta Farm settlement had been in existence for 16 years before armed police accompanied the bulldozers that flattened it last June. The residents had been given less than 24-hours notice and say they were warned that anybody who resisted the evictions would be beaten up.

A school, a childrens' center and a mosque were destroyed along with the peoples' homes.

In an accompanying press release, the director of Amnesty International's Africa program, Kolawole Olaniyan describes the images as a graphic indictment of the Zimbabwean government's policies. They show the horrifying transition of an area from a vibrant community to rubble and shrubs, in the space of just 10 months.

Porta Farm was demolished while a U.N. special envoy sent out to assess the demolitions, which were launched a year ago, was in the country.

In a report highly critical of the government, Anna Tibaijuka estimated that about 700,000 people had been directly affected by the demolition. Another U.N. envoy, Jan Egeland, agreed with the Tibaijuka report, but their findings were met with hostility and dismissed by the Zimbabwean government.

Zimbabwe authorities say the blitz was meant to clean up urban areas. It also ostensibly targeted those it said were involved in criminal activities, black marketing of scarce basic commodities, and illegal dealing in foreign currency, but licensed traders and home industries were also destroyed.