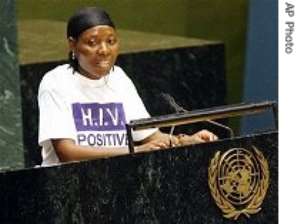 An HIV-infected South African woman, in an address to the U.N. General Assembly, has appealed to world leaders to make AIDS treatments available to all. The appeal came on the first day of a high-level conference aimed at renewing the global fight against HIV/AIDS.

Mavasa, representing a group called the Treatment Action Campaign, was introduced as the first HIV-positive person ever to address the assembly. She strode to the microphone wearing a T-shirt boldly proclaiming the fact. In an hard-hitting speech, she criticized African leaders in particular, for failing to honor commitments made at past AIDS conferences.

"I am a woman living openly with HIV," she said. "I am a person who have survived rapes and other forms of abuse. I call on African leaders sitting here to protect and promote the human rights of all people in vulnerable groups, particularly women and girls. We ask that you not fail us yet again."

Mavasa pleaded with the assembled heads of state and ministers to ensure that AIDS drugs are available, so that when she falls ill, as she inevitably will, she has access to treatments.

"Because of scientific advantages of the past 25 years, I have hope that when time comes for me to take treatment, it would be available," she said. "The entire world's HIV positive people deserve this hope. All the 14,000 more who will be infected by the end of today deserve this hope. None of the 900 people who will die in my country deserve to die today."

Also addressing the gathering, Secretary-General Annan observed that in the past 25 years, HIV/AIDS has gone from local obscurity to global emergency. He praised the progress made, noting that more than 70 of the 191 U.N. member states have quadrupled access to HIV testing and counseling services.

But he pointed out that most others have failed to meet commitments made at a similar session five years ago.

"The global financing target has been met," he said. "And the Global Fund I called for is now fully operational. Yet the vast majority of countries have fallen distressingly short of meeting the targets in the declaration. These shortcomings are deadly."

Mr. Annan said most countries have failed to ensure that young people understand HIV and how it can infect them. And he said governments have been slow to enact measures to fight the spread of AIDS among women and girls.

A group of activists protesting U.S. AIDS policies chained themselves together in the lobby of the building housing America's U.N. mission, chanting "End AIDS now". Police said they used chain cutters to separate the demonstrators, and took 21 of them into custody.