By Stephen A.Quaye || Toronto-Canada
US & Canada 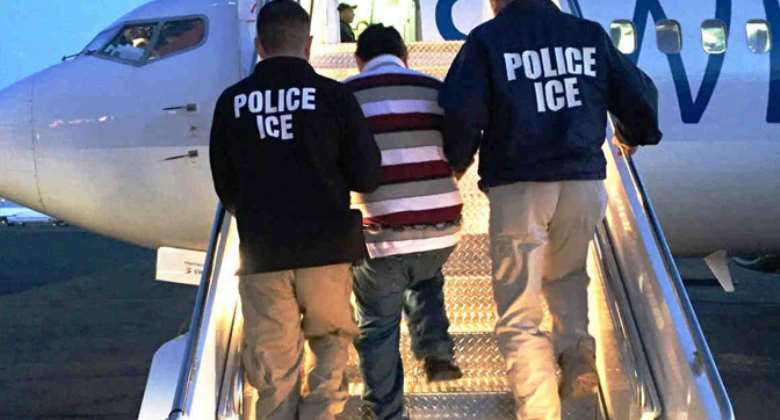 Since the outbreak of the novel coronavirus, some migrants and asylum seekers have been granted Portuguese citizenship to benefit from food security and health care.

But the story is different in United States of America [U.S.A.]. It has warned that despite the Covid-19 pandemic which has so far infected 3,424,053 people and claimed 240,376 lives globally, the country will continue to deport foreign nationals it deemed inadmissible to live in America back to their native countries.

The warning was contained in a deportation news report that was published by Immigration Customs and Enforcement (I.C.E.) and posted on its open website on April 8, 2020.

ICE is one of America's state departments charged with the responsibility to identify, trace, arrest, prosecute and deport illegal immigrants or criminals from the country.

An investigation conducted by this reporter revealed that ICE worked with the U.S. Department of State that brought home a total of 133 Americans and lawful permanent residents on the return leg of a deportation flight via ICE Air operations in April 7, 2020.

United States of America citizens occupied the space available (Space-A) seats on flights to the country from Honduras.

Investigation further revealed that (I.C.E.) removed Honduras nationals with final orders of deportation from the United States to their home country April 6, 2020.On the return flight to the United States of America, [ICE] facilitated the transportation of U.S. citizens in accordance with OMB circular ‘A` 126 and the Department of Home Security (DHS) MD 0020.1.

Prior to boarding the [ICE] Air flight detainees were screened for a temperature higher than 100.4 degrees or shown other symptoms, detainees were immediately referred to medical providers who evaluated and observed them, it was learnt.

The state department in charge of deporting illegal immigrants from America strongly warned that, ``ICE will continue to work with other state security agencies and departments to facilitate the returns of U.S. citizens on future removal flight returns from Guatemala, Honduras and El Salvador throughout the duration of the Covid-19 pandemic.``

It again warned that these return operations have started to expand to other countries outside of the Northern Triangle including Colombia and Nicaragua.

The U.S. Ambassador to Ghana Stephanie S. Sullivan in a recent press statement published by Ghanaweb noted that 1,400 U.S. citizens have returned home from Ghana since the outbreak of the novel coronavirus.

What she failed to inform Ghanaians was whether U.S. citizens actually returned on an ICE Air flight return leg on a removal of inadmissible Ghanaians from America to Ghana and how many Ghanaians were returned.

In Fiscal Year (FY) 2019, ICE`s Enforcement and Removal Operations (ERO) together with Homeland Security Investigations (HSI)offices arrested approximately 143,000 aliens and removed more than 267,000-which is an increase in removals from the prior year.

While the numbers of individuals apprehended or found inadmissible America increased 68% over the previous fiscal year, the total number of aliens arrested by ICE dropped by nearly 10% compared to the fiscal year 2018.

More than 86% of those arrested by ICE had criminal convictions or pending charges.

The U.S. Embassy in Accra must come out because Ghanaians need to know.

WITH FILES FROM (I.C.E.) OPEN WEBSITE AND GETTY IMAGES.