Mahama Isn't Only Incompetent But A Pathological Liar — David Prah 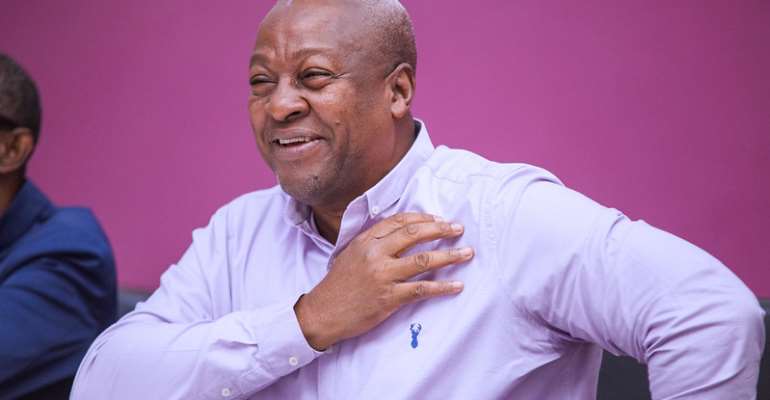 The Eastern Regional Communications Director of the ruling New Patriotic Party (NPP), David Prah has taken a swipe at the Flagbearer of the opposition National Democratic Congress (NDC), John Dramani Mahama over his recent attacks on the Akufo-Addo government.

He describes him as not only the most incompetent former President has witnessed but also a pathological liar.

This is in response to the litany of accusations by the former President against the incorruptible President, H. E. Nana Addo Dankwa Akufo-Addo.

During his recent Facebook Address to the Nation, the Flagbearer of the NDC accused the NPP Government of abandoning hospitals that were started by his previous government across the country, an accusations that did not go down well with the ruling New Patriotic Party's Spokesperson in the Eastern region hence his reaction.

He indicated that Akufo-Addo has made it easier for Ghanaians to acquire driving licenses, passports, register businesses, process pension payments and clear goods at the Ports.

He added that the Akufo Addo's Government has also ended 'Dumsor', restored Teachers and Nurses trainee allowance, restored allowances paid to Arabic/Islamic instructors under the national volunteer service programme, Restored book and research allowances for lecturers, abolished the payment of utility bills by students in tertiary institutions, increased students loan and implemented the "Free SHS" policy universally that has brought a lot of relieves to parents.

Mr. David Prah emphasized that President Akufo-Addo has secured funding for the construction of the Eastern Regional Hospital in Koforidua and is committed to construct six (6) additional Regional Hospitals for the 6 new Regions created under the NPP Government.

Mr. David Prah indicated that President Akufo-Addo during his nationwide broadcast as part of measures to fight Coronavirus announced a massive investment in the sector by constructing Eighty-Eight (88) District Hospitals (100 beds capacity) to be built in the 88 districts that have none.

He added that the President since coming to power has employed more than 64,000 health workers including nurses who were abandoned by Mr Mahama for not less than three to four years.

"The President also announced the construction of Three (3) Infectious Disease Control Centers which will be built in the 3 zonal areas in the country, thus the Northern, Middle-belt and Coastal zones," Mr. David Prah posited.

"We have drones delivering medical supplies in much convenient and faster pace. Three hundred and seven (307) highly sophisticated-modern ambulances have been procured and distributed across the country. These drones and ambulances are helping in the fight against the COVID-19 pandemic."

Mr. Prah stated that as part of the NPP Government's Infrastructure for Poverty Eradication Program (IPEP) a number of community clinics are under construction throughout the country coupled with the supply of beds and other facilities to underserved hospitals.

He mentioned that the wife of the former President, Mrs. Lordina Mahama as a 1st Lady shared headpan for Kayayies to carry loads as compared to the current 1st Lady H. E. Mrs. Rebecca Akufo-Addo donating ambulances to hospitals, constructed an Ultra-Modern Maternity Unit in Konfo Anokye Teaching Hospital and 41-bed Paediatric Intensive Care Unit at the Korle-Bu for the benefit of the entire Ghanaian population.

He stated that Mr. Mahama should be the last person to talk about project abandonment since his NDC government from 2009 to 2016 has been the worst in the history of Ghana and was the period when most Ghanaians witnessed economic hardships coupled with Create, Loot and Share corrupt activities.

He mentioned the collapse of the country's Health Insurance System which he said Akufo Addo as a caring President has come to clear the outstanding bills the NHIA owes.

The outspoken spokesman for the NPP in the Eastern Region is therefore calling on Mr. Mahama to spare Ghanaians his rhetorics if he has nothing beneficial to say.