E/R : Two Murdered; One Shot, Another Butchered At Akyem Osiem And Nkawkaw 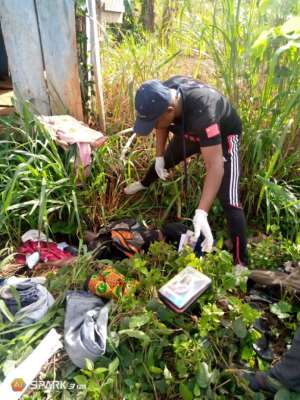 Two persons have been murdered in two separate incidents at Akyem Osiem and Nkawkaw in the Eastern region.

The body of a young man shot dead was found Friday, May 1, 2020 along the Akyem Osiem to Ettukrom highway in Abuakwa North Municipality.

The unidentified man was found in a pool of blood with fresh gunshot wounds at the roadside.

Crime scene detectives from the Police Service led by ASP Fred Kpetigo Crime Officer in charge found a luggage bag which had been ransacked at the crime scene.

After taking inventories, the body was deposited at the Akyem Tafo government Hospital Mortuary pending autopsy.

In a related development, a 30-year-old man has also been found dead 30 meters away at the roadside of Nkawkaw stretch of the Accra to Kumasi Highways.

The deceased was in a multi-coloured boxer short over a black T-shirt with a pair of black socks.

The Public Relations Officer of the Eastern Regional Police Command, DSP Ebenezer Tetteh confirmed to Starr News that a cut was found on his left arm and also at the left ribs of the deceased with foam oozing from the mouth when his body was examined.

He said the body has been deposited at the Holy Family Hospital Morgue in Nkawkaw while investigations continue.

No arrest has been made in both cases.
---starrfmonline