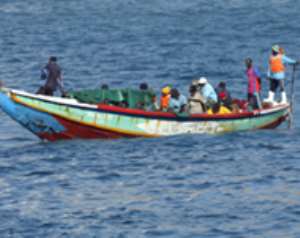 Authorities in Barbados are trying to identify the bodies of 11 young West African men found in a boat which had been adrift for months.

It is thought the men were part of a group of about 50 immigrants whose ship got lost while en route to Spain's Canary Islands from West Africa, drifting thousands of miles across the Atlantic Ocean.

Post-mortems indicated the men died from starvation and dehydration.

Dale Marshall, the Barbados attorney general, said an assessment team from the international police force Interpol had arrived and was examining the men's mummified remains.

DNA samples would be kept to help identify the bodies, he added.

Most of the men are thought to be from the West African nation of Senegal. Police reportedly found currency in euros, a travel itinerary and tickets for a Senegal Airways flight.

Some passengers also appeared to have written notes as their situation grew hopeless, local media reported.

"I would like to send to my family in Bassada [Senegal] a sum of money. Please excuse me and goodbye," one man apparently wrote in a letter found wedged between the bodies.

Authorities are said to be looking for a man known as "the Spaniard" who organised the men's trip and charged them up to $2,000 each.

Authorities on the islands say they have intercepted nearly 7,000 migrants since January, compared with 4,751 in all of 2005.

Many ships become lost and left adrift, while others are crowded or unseaworthy.

More than 1,000 are believed to have died attempting the journey from Africa to the Canary Islands since December, according to the Red Cross in Mauritania, a favored departure point for many such boats.