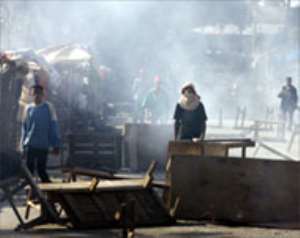 An army commander behind East Timor's rebellion has blamed the violence on the country's prime minister and urged him to resign.

Major Alfredo Reinado, whose group of soldiers has been embroiled in clashes with the country's security forces, said the violence would continue until Mari Alkatiri left office.

"Alkatiri has to resign and go to court for all the crimes he ordered," he said on Thursday.

Xanana Gusmao, the East Timorese president, said on Tuesday that he was assuming sole responsibility for the country's armed forces and would take charge of co-ordinating international peacekeeping efforts.

However, confusion ensued when Alkatiri said he was still in charge.

Fighting erupted last week when 600 soldiers were dismissed after protesting about discrimination and unpaid salaries.

Violence spread as rival gangs rampaged across the country, forcing tens of thousands to leave their homes.

At least 20 people have died in the violence, leading to the deployment of about 2,000 mainly Australian peacekeepers in East Timor.

Gusmao called for calm on Thursday, asking police and security forces to rein in the violence.

"Forgive each other, forget the past, let us build the nation from ashes once again," he said.

Australia last led troops into East Timor in 1999 to restore law and order after violence by militia groups, supported by elements of the Indonesian military, after a vote to break free of Indonesian rule.

You're A Blatant Liar; I've Never Attacked Any Religious Lea...
1 hour ago