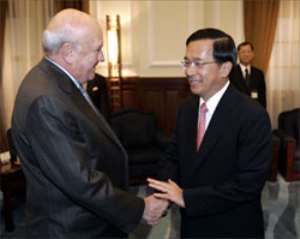 Taiwan's president has ceded some powers to the premier in an attempt to deflect growing pressure from supporters and opponents to resign.

But media on Thursday said it was not enough.

Chen Shui-bian, the president, whose approval rating sank to new lows after an insider trading scandal implicated his son-in-law, said late on Wednesday that Premier Su Tseng-chang would be wholly responsible for appointing cabinet ministers and for government policies.

The Chinese-language United Daily News interpreted it as Chen still clinging to the diplomatic and military portfolios and overseeing ties with China, which claims self-ruled democratic Taiwan as a breakaway province.

"Becoming a mere figurehead cannot quell the people's anger," the China Times said in a commentary.

"Water can keep afloat but also overturn a boat," the newspaper said, referring to the power of the people.
Ambiguity

Taiwan's constitution does not spell out clearly whether the country has a presidential or parliamentary system of government.

In the past, some premiers have acted as the president's chief of staff and served only to carry out his wishes. Others have taken on greater powers.

Chen's announcement may mean the premier could be 100% his own man, leaving Chen as a lame duck with two years to go before his second and final four-year term ends in 2008. The constitution bars him from running for a third term.

Chen's political woes worsened last Thursday when son-in-law Chao Chien-ming was detained on suspicion of insider trading, the first time a member of Taiwan's first family has been held on suspicion of breaking the law.

An opposition deputy has collected the signatures of 110 colleagues for a motion to oust Chen in a parliamentary vote, but the opposition lacks the two-thirds majority needed to sack Chen.

Election 2020: Challenging My Opponent's Identity Will Not S...
7 minutes ago