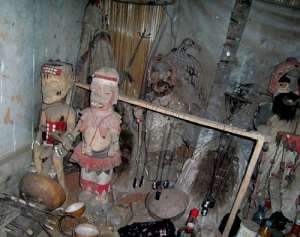 Two spiritualists at Adu Kwadwo a Community near Maame Dede in the Upper West Akyem District of the Eastern Region have been arrested by a team of Police and Military personnel over alleged fraud and murder cases.

The two spiritualists; Scorpion and Power 1 were arrested upon the intelligence picked by the security personnel.

According to information available to this portal, the culprits were busted for alleged ritual murder, fraud and the production of fake currencies.

Information on the ground also indicated that following the joint armed security team that carried out the operation, two human dead bodies were exhumed at where these two fetish priests carry their daily activities.

This portal will keep you informed and provide detailed information about the operation as and when it unfolds.