Agric Minister Straightens Regional Director After Farmers At Wenchi, Tain And Banda Did Not Receive The Organic Fertilizer 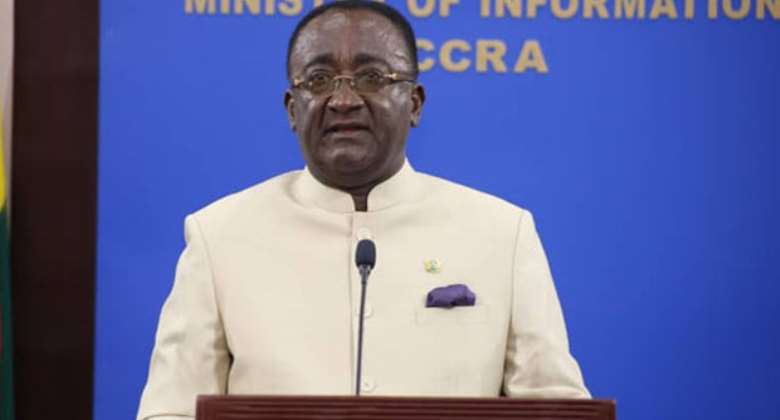 The Agric Minister, Dr. Owusu Afriyie Akoto, has bemoaned the fact that bags of fertilizer meant for distribution to farmers in the Banda, Tain and Wenchi districts for the 2019 cropping season are still lying at the offices of the ministry in the Bono Region.

The minister expressed his disgust at a stakeholder meeting he held with the Bono Regional Coordinating Council during a two-day working visit to the region to assess the impact of the Covid-19 outbreak in the country on farmers, especially the Planting for Food and Jobs (PFJ) programme.

Matters came to a head when Richard Donkor, the Regional Director, presenting his report to the minister and his technical team mentioned that farmers at Wenchi, Tain and Banda did not receive organic fertilizer (granular & compost) and inorganic fertilizer (NPK & UREA) for the 2019 cropping season because there were no agro-chemical dealers in the districts through whom the inputs could be distributed.

His explanation did not go down well with the minister and his team because Wenchi, which is considered one of maize farming zones in the country, did not receive fertilizer for the cropping season.

The minister did not mince words when he rebuked the director, saying, “You could not sit in the comfort of your office and expect agro-chemical dealers to walk in and register with you.”

He then ordered the regional director, saying, “You must make efforts and go to the field and register them and report back to me within a week.”

The minister, throughout the week, has been visiting Ahafo, Bono and Bono East regions starting from Tano North in the Ahafo Region where he inspected an ongoing poultry processing plant (slaughter house) being put up by a private investor, with a capacity to employ 5,000 direct workers and 1,000 indirect workers, including out-growers.

When completed, the factory will have the capacity to process 6,000 poultry meat per hour and 1.6m monthly according to the investor, Nana Kwame Anning, who briefed the minister on progress of work.

Dr. Akoto described the project as a good step and said it was going to help make Ghana self-sufficient in poultry production and also boost the 'Ghana Beyond Aid' agenda.

“The government spends about $350m yearly to import poultry products into the country and we find this to be unacceptable. Government will partner you to make it a reality,” he said and pledged the government's commitment to ensure such projects become successful.

Other ongoing private projects the minister inspected included Weddi Africa Tomato Processing and Agro Farms at Berekum West District – both under the One District, One Factory (IDIF) vision of the government.

Besides, the minister inspected a 10,000 metric ton warehouse being constructed under the IDIF and the One Warehouse initiative. He expressed satisfaction with progress of work, but was not happy people were encroaching on government lands at the site and ordered that walls being erected by churches be demolished.

He said the government was giving working capital to poultry farmers in the regions as a pilot project to produce broilers and asked them to also apply to get support.

The farmers laid before him some problems including high cost of inputs, low patronage of eggs due to Covid-19, lack of processing plant and the effect of H9 influenza.

He presented some personal protective equipment to the poultry farmers association in the region and asked the members to follow laid-down protocols against the Covid-19 to avoid contracting the disease.