'It doesn't come this far': how rural S.Africa views coronavirus 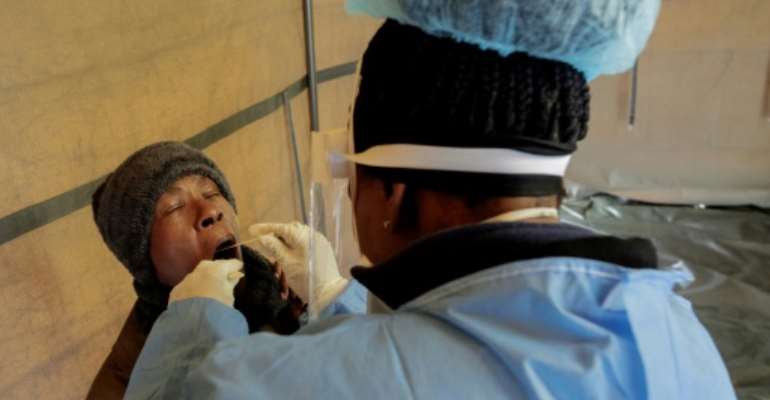 With over 100 deaths and more than 5,600 coronavirus cases, South Africa has the second highest number of infections on the continent after Egypt.Â . By Luca Sola (AFP)

From his garden in South Africa's remote Limpopo province, Gilbert Phakola chuckled at a group of healthcare workers knocking on doors to test rural inhabitants for coronavirus.

"You guys are coming to fight the virus?," asked the 80-year old pensioner, bemused by the mask-clad parade causing a commotion on the usually quiet street.

Life has tested him sufficiently not to be phased by the spectacle or the thought of catching coronavirus.

He continued to soak up the sun, perched on a plastic chair in a faded yellow "Bafana Bafana" football shirt.

"I'm not worried because (the virus) doesn't come this far," Phakola said. "There is no-one living here who comes from far away, no-one.

"It can happen to those who are using the airlines and then come back," he added. "But here we don't use the airlines. We are travelling in taxis."

Ever a good sport, however, Phakola was happy to go along with things, patiently answering the team's questions when the workers reached his house.

With no signs of fever, cough, sore throat or difficulty breathing, the octogenarian ticked all the right boxes and was not referred for testing.

"One single symptom is enough," muttered the head nurse, who did not wish to be named, before leading her troops on to the next house.

With 5,951 coronavirus cases including 116 deaths as of late Friday, South Africa is the worst affected country in subSaharan Africa.

President Cyril Ramaphosa reacted rapidly to the outbreak by imposing a strict five-week lockdown last month and launching a mass screening and testing campaign. Some confinement measures were lifted this week.

Meanwhile, health authorities in Limpopo have rounded up 10,000 volunteers to travel from village to village in search of COVID-19.

Around half of the province's five million inhabitants have been screened so far and the results are reassuring: just 32 confirmed cases, including two deaths.

Gabaza is surrounded by green hills and fields -- a bucolic landscape far removed from the frantic lives of those in Johannesburg's overcrowded townships, where a coronavirus outbreak would be disastrous.

But resident Ivy Mohali, 47, remained concerned about the pandemic.

"We are always watching the news and we are seeing what is happening in Spain, the UK," said the social worker, resting in a shady corner of her clay courtyard.

"(We see) people are dying and how this virus has spread, so we are trying by all means to avoid it."

Like millions of people across the world, Mohali has been unable to work during the lockdown -- adding to the daily struggles she faced before the pandemic.

"We don't have running water," Mohali complained. "There are water tanks provided by the government... but it's not enough for the whole family because you have to do the cooking, the drinking and the washing of clothes."

The lack of water has made it impossible for Mohali's family to regularly wash hands and clean their home.

"We avoid moving around the streets," said Mohali, who lives with three other family members.

"We are (also) trying to practise social distancing when we are watching television."

Groups of children played freely outside the house, forgetting to keep a safe distance as they chased each other down the street.

"Under the circumstances we think the people of Limpopo have done relatively well," Neil Shikwambana, spokesman for the province's health MEC, told AFP.

"A greater majority are staying at home and are only leaving to get essentials."

Shikwambana was confident more efforts to raise awareness about coronavirus would help get the message through to everyone.

"They need to know that the virus is not only confined to big cities, but also townships and rural areas," Shikwambana said.

Petunia Mthetho did not need to be convinced.

"This COVID-19 is very serious," said the 38-year-old mother-of-two, who works for the education ministry.

"I don't want to die, I don't want that this virus to infect my children," she told the healthcare workers who knocked on her door.

After filling in their questionnaires, they took the opportunity to slip away unnoticed, eyes twinkling with mischief as they ran off into the distance.