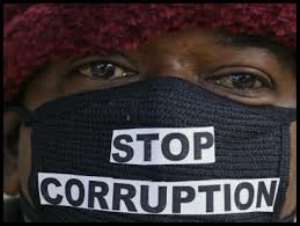 Ghana is one of the many African countries that are gripped by what is commonly referred to as institutional corruption. It is said by many economic experts that this is the main canker that is retarding the development and progress of the nation, and for that matter, the whole of the continent.

It runs through the whole society. The experts argue that because the country is endowed with many rich mineral and agricultural resources, Ghana should not have been poor in development. But Ghana is because its resources are not managed and utilized to the benefit of the whole nation by the selfish and greedy politicians.

Instead of developing the country, they divert the resources into their personal pockets with the avowed aim of amassing wealth. Most Ghanaians know that there is a deplorable problem of corruption even at the governmental level because their living standards remain the same. They know the country’s resources are being stolen by a few individuals, mainly politicians.

What they do not know is that there is another type of corruption that does not involve mineral resources and money but it is as damaging, if not more, as the corruption they know. This is the operation that is popularly referred to as Protocol List. Protocol list is a scheme that is engaged in secretly, surprisingly, by the elite-- the most influential people in the society.

These accomplices include government and government officials, traditional chiefs, heads of corporate institutions and fellows of higher institutions, especially the universities. I do not know how these groups of people got together and started this corrupt practice of Protocol list but it has been in operation for ages. Members of the group have arrogated to themselves the privilege of priority admission for their children or any candidate they present for admission in their lists.

The protocol list can contain one, two or more students just for one member alone. Sometimes, it can be lengthy. It was said some time ago that the list that arrived at one of the universities from one very popular chief was like a booklet. So you can imagine the number of people that was compulsorily admitted that year in his name.

This could mean that he added names of children from family members and friends from whom he must have collected money. The admission is not limited to schools and the universities only. Members also have absolute right to priority admissions into the armed forces and the police.

Any name that is submitted to the admissions board has to be taken, come what may, even if it involves cancelling someone’s name. Insiders, especially teachers and lecturers, cannot say they are not aware of this immoral activity, considering the enrolment requirements and procedures they put in place.

Firstly, subject lecturers in a department meet and agree on the cut-off point or the aggregate and then the number of students to be taken for each subject. For instance, if the previous cut-off point is considered and the agreement is that for the current year, the aggregate should be, say, twelve (12) then that is it. Every candidate’s aggregate must be up to 12.

This has to be approved by the whole department, the school and by the academic board. But after putting all this in place, schools/universities re-open and lecturers are surprised to meet students who have come in with aggregates outside the cut-off points. For instance, for a department that had decided on a cut-off point of 12, there may be students whose aggregates are 15 or over.

So if that department needs, say, twenty (20) students and there are five (5) of them whose aggregates are above the cut-off point of 12 then the five students are protocol list students-- backdoor students. Suppose, at least two protocol students are admitted to a department, multiply that number by the so many departments at the university.

You will be surprised to know the great number of students that are enrolled each year with inferior aggregates through protocol list. The fact is that these students admitted through the back door have sadly deprived others who could have made the cut-off aggregate and have their education in the public system.

Some of them drop out at the end of the first because they are not academically good enough. But the damage had already been done. Those who lost their chances because of them cannot not go back to do their courses anymore and they have to live with broken-heart and in misery.

There are many people in the society who have benefitted from this abhorrent illicit scheme. One of them is the current Youth Organizer of NPP. Some years back, he was admitted into the Home Science department without the prior knowledge of the department. His arrival coupled with the fact that he had come to do a traditionally all-female course raised many eye-brows and a concern.

The head of the department was naturally unhappy but there was nothing she could do. At the end of the first year, the powers that be again made an arrangement for him to transfer to the psychology department to the annoyance of the Home science lecturers. His transfer was made possible because the Vice-chancellor then was an NPP member. The Home Science was therefore just used as a stepping stone to enable him to enter the university.

Some people in the society, I am sure, are aware of this illicit operation of protocol list but those who are to condemn it are the very influential people who are engaged in it---the politicians of all parties, the chiefs, and corporate board members. But it is unfair. It is wrong because it is a way of cheating. Those involved always get admissions for their children to the institutions of their choice, and the best ones too, without any stress.

It is wrong because it deprives other genuine prospective students of the chance to get state education and qualification. It is wrong because it puts the deprived applicants into mental agony and financial difficulties. They have to look for money to enable continue to pursue their ambition in private institutions.

The consequences are many. If they do not get the money then that is the end of their dreams and lives. Some live in mental agony forever if they do not commit suicide. It is not only the candidates whose chances are stolen from them who suffer. The whole nation, like in all corruption, also does. The fact is that many of these protocol students are always not the clever ones.

If they were then why should they not go in for direct admission? Why do they have to go through someone? It means their academic fundamentals are weak. Some of them manage to finish their courses anyway but they come out and are unable to do anything to help in the nation’s development. Therefore the protocol list has to stop. It is corruption---discriminatory, unfair, and morally wrong.