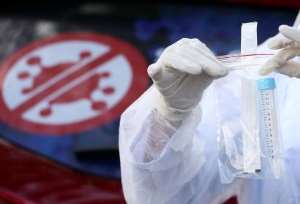 “We want the monies to be properly used in the quest of fighting against COVID-19. We expect the assemblies to use the money to support and educate our people,” Mr Abu Kasangabata, Executive Director of the Think Tank, has said.

He said many MMDCEs have failed to put to use an amount of GHC 166,000 allocated to each Metropolitan Municipal and District Assembly in the country to carry out public education on the pandemic.

He said preliminary investigations by the organisation revealed that “various assemblies across the board have refused to involve the National Commission and Civic Education (NCCE) in any public education drive.”

“Those who even come close to the use of the money so far, as the fight against the Covid-19 is concerned resorted to the use of Veronica Buckets and some tissues in some selected communities within their jurisdictions,” he added.

The Executive Director suggested some of the money could have been used to engage local radio stations within their jurisdictions to prepare jingles on COVID-19 in their local languages for effective and efficient dissemination of messages.

He urged the Assemblies to engage the NCCEs to mount aggressive public education to fight the deadly virus that has already infected 44 persons in four regions in north Ghana, excluding the Savannah region.

The best approach would have been the active involvement of the NCCE as a constitutionally mandated body to be mounting public education in communities against the pandemic, he said.

The latest reports by the Ghana Health Service [website dedicated for providing an update on the coronavirus] show that Upper East has confirmed 19 cases, Northern 13, Upper West 10, and North East two. There is no case in the Savannah region.

Mr Kasangabata said there is an imperative need for public education on the preventive protocols of the virus to reach out to every community in each of the assemblies.

“We are appealing to the Assemblies to use the money well. The money allocated is meant for public education against the COVID-19 pandemic for the benefit of the people,” he said. “It is not meant for inspection of projects or any other purpose.”

He said the Savannah Development Policy Think Tank would demand proper accountability of every pesewa given out by the Government to all MMDECs across the country in the fight against the COVID-19 pandemic.

He called on stakeholders including civil society organisations and individuals to also demand accountability from duty-bearers as far as the GH¢166,000 COVID-19 allocations to the assemblies are concerned.

Mahama Installed As Development Chief Of Apesika
55 minutes ago

New Voter Roll: EC Quickly Restored My Name After I Raised A...
55 minutes ago