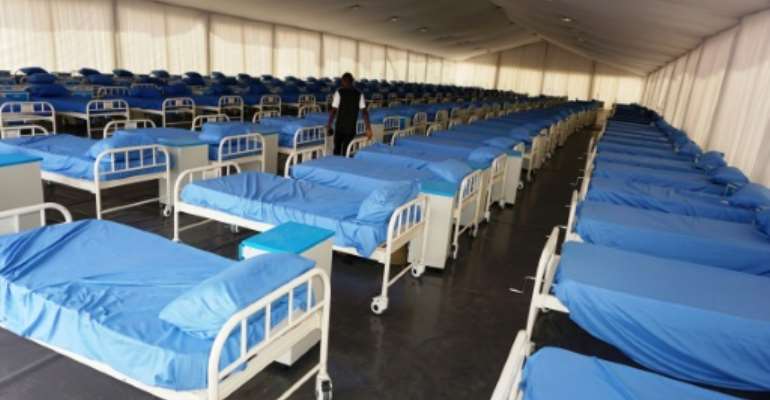 A coronavirus isolation centre at Kano stadium was built with the help of Africa's richest man Aliko Dangote. By AMINU ABUBAKAR (AFP/File)

Confirmed coronavirus cases in Nigeria's northern Kano state have almost tripled in a few days after the government ramped up measures following a spate of "mysterious deaths", figures showed Friday.

The Nigeria Centre for Disease Control said the number of recorded infections across Kano rose to 219, up from 77 at the start of the week.

The number of fatalities in the state officially confirmed as due to coronavirus stands at three.

The rise in cases comes after the authorities ratcheted up their focus on the region -- which includes north Nigeria's biggest city -- following a spike in what officials called "mysterious deaths".

President Muhammadu Buhari on Monday imposed a two-week lockdown on Kano state and pledged "all the necessary human, material and technical resources" to tackle the issue.

Health authorities have been conducting "verbal autopsies" -- asking relatives and doctors about the symptoms of those who died recently without exhuming the bodies for physical tests.

State officials insisted most of the fatalities were due to other diseases rather than COVID-19.

Nasiru Sani Gwarzo, head of the presidential COVID-19 taskforce sent to Kano, told AFP that Kano appeared to be "at the threshold of the community transmission stage".

But he said the rise in deaths was also due to cuts to medical services for other ailments as a result of the crisis.

"We observe some sort of collateral damage from war where some sick people who could have been taken care of had there been no outbreak fall victim," he said.

Medics in Kano have reported hospitals sending inpatients home due to the pandemic and the closure of pharmacies has made getting vital drugs tougher.

Gwarzo said testing capacity for the state of over 13 million people was currently "at least 88 tests daily" after the reopening of its sole laboratory following a virus outbreak there.

A second lab is slated to open next week that will boost capacity to 300 tests and officials hope to increase the number of sample collection sites, he said.

While Nigeria has intensified focus on Kano, it is set to ease a lockdown on largest city Lagos and its capital Abuja from Monday.

Shutdown measures present major social and economic challenges in Africa's most populous nation, where roughly half of the 200 million people live in dire poverty.

Nigeria has confirmed 1,932 infections and 58 deaths nationwide from the novel coronavirus, with megacity Lagos the only region with more cases than Kano.

Testing has been severely limited and fewer than 16,000 samples have so far been screened.