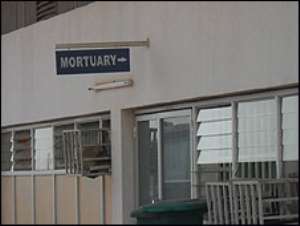 Body withdrawals at the Okomfo Anokye Teaching Hospital (KATH) mortuary have increased from five to sixty a week as bereaved families have resorted to private burials.

The move was as a result of President Akufo Addo’s appeal to decongest the various morgues across the country as a result of the ban on public and social gatherings to halt the spread of CONVID-19.

President Akufo-Addo on March 15, 2020, in a televised broadcast, declared a ban on all public gatherings as part of measures to stop the spread of coronavirus in the country.

On Sunday, April 26, 2020, the president in his 8th address to the nation on the coronavirus update extended the ban for another two weeks.

“Private burials are permitted, but with limited numbers, not exceeding twenty-five (25) in attendance,” President Akufo-Addo said.

The Ashanti Regional Chairman for Mortuary Workers Association, Ebenezer Asrifi, in an interview with Otec News’ reporter, Kwame Agyenim Boateng, on Friday, May 1, 2020, said the president’s appeal has created spaces at the facility as more bodies are withdrawn every day.

“Bereaved families are withdrawing their loved ones for private burials, creating enough spaces to keep new ones. We are encouraging them to organize burials to save them from incurring more mortuary costs,” he added.