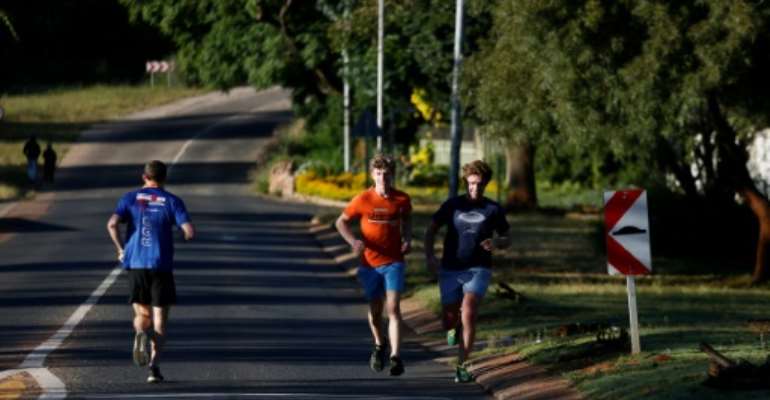 Some outside activities such as cycling, walking and running are allowed, but for just three hours in the morning. By Phill Magakoe (AFP)

South Africa began to gradually ease its strict coronavirus lockdown on Friday, allowing some industries to reopen after five weeks of restrictions that plunged its struggling economy deeper into turmoil.

The economy of Africa's most industrialised nation was already teetering with low growth and high debts when the lockdown kicked in on March 27.

"Our president ... has got a very difficult battle with managing livelihoods and economic issues together with health issues," Paul Kapelus, a development specialist cycling at a Johannesburg park, said in the early hours of the first day of the eased restrictions.

South Africa's government has adopted a gradual and phased approach to reopen the economy from May 1. By MARCO LONGARI (AFP)

Around 1.5 million workers in selected industries will return to work in the next phase under strict health conditions, according to Trade and Industry Minister Ebrahim Patel.

Winter clothing, textile and packaging manufacturing were among the industries permitted to reopen factories from Friday.

Restaurants also opened only for takeaway deliveries but controversial bans on the sale of cigarettes and alcohol remained.

Social distancing and wearing masks in public and at workplaces will be mandatory.

Some outdoor activities such as cycling, walking and running commenced on Friday -- but for just three hours in the morning.

Construction company owner and jogger Sean Lawrenson woke up at the crack of dawn for his first run in weeks in the northern Johannesburg suburb of Emmarentia, home to one of the city's most stunning parks.

South Africans were grateful for the small freedoms they can now enjoy. By Phill Magakoe (AFP/File)

"Gosh I forgot how beautiful it was, how much I missed it. It felt great," Lawrenson said, wearing a protective black face mask and beanie.

But "running in a mask is pretty tough. I think I'm going to use a buffer tomorrow."

For the 50-year old cyclist Paul Kapelus, "the most important thing is that my wife is happy that I'm out of the house."

As the economy slowly reopened, South Africans were grateful for the small freedoms they could not enjoy under strict lockdown.

In downtown Hillbrow, a few people were spotted exercising by running up and down a steep road.

"If I am not running I am not feeling well," said Reason Nyamvura as he completed an impressive set of squat jumps and drills.

'Our people need to eat'

President Cyril Ramaphosa took the decision to stagger the easing of the lockdown restrictions in a bid to strike a balance between protecting public health and the economy.

"Our people need to eat. They need to earn a living," Ramaphosa said.

"Companies need to be able to produce and to trade, they need to generate revenue and keep their employees in employment."

Finance Minister Tito Mboweni said the country will seek coronavirus relief aid from the International Monetary Fund and the World Bank, where it is eligible for up to $4.2 billion.

The lockdown has had a devastating impact on the economy. By Phill Magakoe (AFP)

The lockdown has had a devastating impact on the economy, but a top government adviser on the pandemic said it has slowed transmissions.

"The lockdown has had quite an effect," infectious disease epidemiologist Salim Abdool Karim told AFP.

"We have got quite clear evidence that we have flattened the curve and that the number of cases we are seeing -- and the number of infections probably occurring -- has declined quite substantially," he said.

While the World Health Organization has commended South Africa for acting swiftly, it has called for caution in easing coronavirus controls.

"Lockdowns are being eased in some parts of Africa, but we cannot just revert back to how things were before the outbreak," said Dr Matshidiso Moeti, the World Health Organization (WHO) Regional Director for Africa.

Nigeria and Namibia will also lift some regulations over the next few days.

"If governments abruptly end these measures, we risk losing the gains countries have made so far against COVID-19," Moeti warned.