By Ollia Horton with RFI
Europe 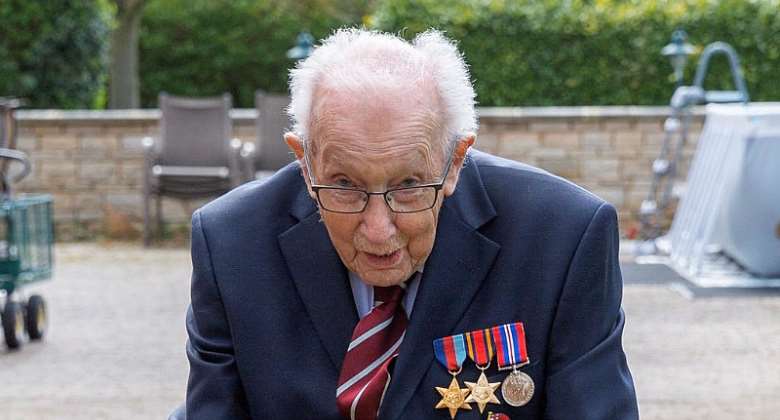 The World War Two veteran from Yorkshire, Tom Moore celebrated his 100th birthday on Thursday, with wishes from the Queen and a RAF flyover. Moore has helped raise over 33 million euros to help support hospital staff on the frontline against the coronavirus, becoming an inspiration for ordinary citizens.

A RAF flypast featuring a Hurricane and a Spitfire was organised to celebrate the 100th birthday of a man who in just a few months has become a national hero.

He also received birthday greetings from the Queen and prime minister.

Some time last year, Tom Moore came up with the idea that he would raise 1000 pounds by doing 100 laps of his garden (2,5 kilometres) before his 100th birthday to raise money for NHS Charities Together.

In particular, he said it was a way to thank the British public hospital staff who helped him with cancer treatments and a broken hip.

In just 24 hours, his online platform Just Giving had raised 70,000 pounds, and has now gone well past 30 million.

"To all those people who are finding it difficult at the moment," he told the BBC earlier this month, referring to confinement.

"The sun will shine on you again, and the clouds will go away."

The words came just after he completed the 100th lap of his sponsored walk around his garden in Bedfordshire on 16 April.

Images of his cheerful face and walking frame have been seen in all corners of the globe.

Hashtags such as #tomorrowwillbeagoodday and #walkwithtom have gained momentum on social media.

Extraordinary feat
Captain Tom's story has brought some solace during a global pandemic.

The director-general of the World Health Organisation (WHO), Tedros Adhanom Ghebreyesus, called his feat an "extraordinary act of solidarity".

Here in France, there has been a major show of solidarity from ordinary citizens to those on the frontline battling coronavirus.

The French crowdfunding platform Leetchi reported that 4,300 accounts had been set up, mostly in support of hospital staff and people in need since the beginning of the lockdown on 17 March.

Some examples include a collective of Entrepreneurs and Artists raised 140,000 euros so far to buy protective clothing and masks for the public health body (Santé Publique France). Similar sums have been raised for hospitals in Bordeaux and Ajaccio.

Vital social link
According to pyschoanalyst Serge Hefez, there has been a massive rise in collective conscience since the start of the crisis, and "a need for a vital social link" despite the confinement.

This has translated into acts of solidarity in many forms, he told news wesbite La Depeche.

Traditional methods of fundraising for groups like the Red Cross are not possible during confinement such as street collections and door to door, so they've turned to online forums.

This organisation got a boost this week, when French rapper Jul from Marseille raised over 300,000 euros to support the Fondation Hopitaux de France, including a donation of 30,000 and profits from the auction of items in his personal collection.

For electronic music fans, DJ Bob Sinclair will give a special online concert from the Arc de Triomphe in Paris on Monday 4 May to raise funds for Médecins sans Frontières, la Fondation de France and loans fund One-O-One.

Elsewhere, the initiative known as Protect your Carer (Protège ton Soignant) lauched a fundraising drive called Masked Heros (HérosMasqués) which encourages people to buy a T-shirt and wear it during the 8pm applause which has become a regular feature on balconies across French cities.

In the last week, 12,500 euros has been raised in support of hospital staff.

Other forms of solidarity have become apparent during the crisis such as helping elderly or isolated neighbours by offering to walk dogs or buy groceries or lending spare appartments or rooms to health workers so they can be closer to their work.