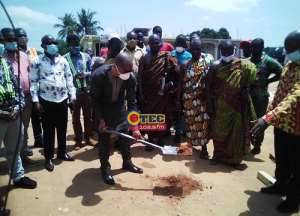 The NPP Member of Parliament for Offinso South Municipal in the Ashanti region, Hon. Ben Abdallah Banda, has on Tuesday, April 29, 2020, cut the sod for the commencement of 7-kilometre roads in his constituency.

The 3.5 kilometer road from Offinso-Agric to Anyankaso and a 3.5 kilometer Abofour road linking Dumasua, when asphalted would boost economic activities between residents in the area and neighbouring communities.

The road project is being financed by the central government, with Primesec Construction Company as the contractors, according to the lawmaker.

“When completed, these roads will boost economic activities in the area, as the will be motorable to commuters, especially transporting of foodstuffs from farms to the various markets centres at Offinso and its environs,” he said.

Hon. Ben Abdallah Banda, who is also the chairman for Parliamentary Select Committee on Constitutional, Legal and Parliamentary Affairs, also commissioned 3 units classroom at Abofuor St. Jerome SHS and again cut the sod for the construction of 3 Unit Classroom blocks at Abofour Adabiya Islamic Basic School and is funded by the Zongo Development Ministry.

Nana Agyari Kokro, the Chief of Offinso-Antoa on behalf of the Offinso Paramount Chief and people of the area expressed appreciation to the government and the MP for the implementation of the unprecedented project.

In a mini durbar, the chief pledges his support for all undertaken projects in the Offinso municipality and declared his support for the MP in the upcoming NPP Parliamentary primaries.