Covid-19: This Is Not The Best Time To Name Running Mate – Mahama 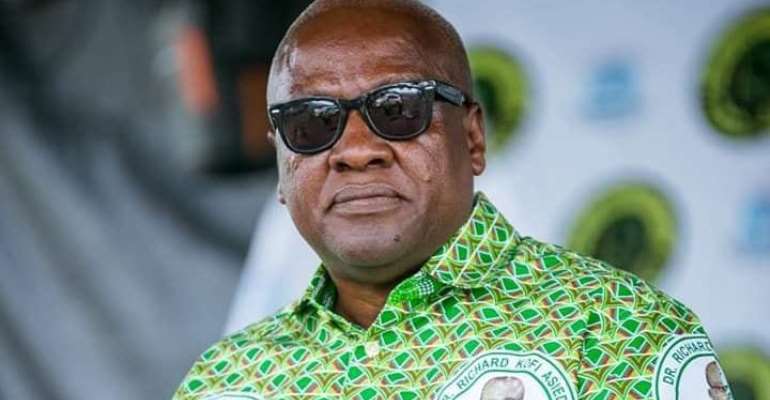 The flagbearer of the opposition National Democratic Congress (NDC), John Dramani Mahama says there is no use in naming a running mate to contest with him in the general elections as the nation fights the novel coronavirus.

The conduct of the December 7, 2020 polls remains uncertain given the fact that many of the electoral activities in the build-up to the polls have been put on hold until further notice as a result of the pandemic.

Due to the disease, a ban on public gatherings has been imposed on Ghanaians, thereby making it impossible to conduct the elections and run other political activities in the way it has been done over the years.

Already, the Electoral Commission (EC) has suspended its planned compilation of a new voters' register which was initially scheduled for April 18, 2020 because of COVID-19.

John Maham was elected as flagbearer of the NDC in February 2019. He is yet to name a running mate over a year on despite intense political pressure on him.

During a live Facebook session to interact with the public on Thursday, April 30, the former president indicated that the NDC will announce his partner at the appropriate time.

“We are on track. We are not behind time. The party is working assiduously. I have a firm idea who I want my running mate to be and we would name him at the appropriate time. We have timelines that we are working on. We have to build up our national campaign team. We have to name and outdoor our running mate. We have to publish and inaugurate our manifesto. These are all timelines that the party is working on. We are not late at all. The deadline for naming our running mate will be when the Electoral Commission opens nominations somewhere in September and so we do have enough time,” he said.

He continued, “But in the midst of COVID-19, what is the use of naming a running mate? You can’t even outdoor him. The President is encouraging all of us to stay at home and this is not the most opportune time to come out and name your running mate. After I’ve done consultation at the appropriate time with the National Executive Committee and the Council of Elders, we will bring the person; the person who will be worthy of being the NDC’s running mate and who will a significant contribution to the progress and prosperity of this country.”

Rumours of an NDC running mate

In past years, there has been speculation about prominent NDC members being selected as Mahama’s running mate.

A number of names have popped up for the position but the party is yet to make an official announcement.

Just a few weeks ago, Mahama, debunked reports suggesting he has selected a running mate for the 2020 general elections.

For this year only, there have been reports making rounds indicating that the former president had selected the Member of Parliament for Asunafo South, Eric Opoku as his running mate.

Late in 2019, rumours had it that Ghana's longest-serving Finance Minister, Professor Kwesi Botchwey had been chosen as a running mate to Mr. Mahama.

Prior to the NDC internal election in 2018, people were speculating that John Mahama has named Dr. Zanetor Rawlings, daughter of former president and NDC founder, Jerry John Rawlings as his running mate to snatch power from the NPP government.

But the spokesperson for John Mahama, James Agyenim Boateng, in a statement copied to citinewsroom.com said the reports are false and has called on Ghanaians to disregard it.

But amidst all these rumours and expectations, the party's National Chairman says the absence of a running mate for the party's flagbearer is not a cause for concern .

The last time the NDC spoke on the issue, Ofosu Ampofo said, “In previous elections, we always selected the running mate about six months to the election.