Would Kwame Nkrumah Battle The Covid-19 As Doing The Latter Day Leaders? 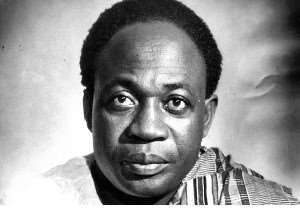 The dedicated youths who joined in the rebuilding work of the Goka palace found in the rubbles a pristine story of a first settler Shepherd in the vault of the Adomakomahene, or the Chief Historian.

The Shepherd was amongst the first settlers who migrated from the Kingdom of Akwamu, sojourning through Dormaa Ahenkuro, Suma Ahenkuro, leaving families in all those Kingdoms, and later settled in Goka.

This Shepherd had a flock of sheep which was an envy to all eyes, being them that of the preying beasts or jealous neighbours in human.

He, not like other shepherds who reared the sheep for only their meat, this industrious Shepherd used the skin of the sheep who die of old age or illness for clothing, bags, shoes, belts and many other personal effects. With their milk, he didn't only leave it for the suckling of the lambs, but it was skimmed and used in the diets of his household, and sold some to his neighbours also. So was the wool used in making bedding.

These productive way of shepherding by the good Shepherd had great enemies in the lions, the hyaenas, and the wolves, who are not allowed any chance to prey on the sheep fat when they go astray. The Shepherd chased and bludgeoned to death any beast who dared trespassing to his compound hunting a flock.

These beasts then met under the darkness to plot the annihilation of the good Shepherd so they can get hold of his flock for their venison, or food.

To do this, they contracted the beautiful forest gazelle so revered by the Goka people as bringers of wealth to play possum as injured by a hunting beast. Since it's a taboo to eat the gazelle, the Shepherd will nurse its wounds in hope of blessings from the heavens gracing his home with wealth.

The devilish ploy of the beasts worked to perfection when the Shepherd left his flock to pass the usual road he used to get herbs for medicinal usage.

As he bent on unsuspectingly, caring for the supposed wounds of the gazelle, the beasts who by then had laid siege to pounce on the Shepherd accosted him. He fought them till he was wounded mortally by their claws.

A friend of his found him after he'd sought cover from the beasts in s secluded place the deadly animals couldn't pursue.

As if that was what they wanted, the neighbouring shepherds of the good Shepherd were able to agree with the beasts to build fences around the compound of the Shepherd to barricade his reentry, exiling him to a foreign land. In return, the neighbours will throw to the beasts one grown sheep anytime the beasts requested for their part of the bargain.

As the neighbours were not mastered in the art of shepherding, the flock was losing its population to the insatiable beasts. The milk never skimmed, and the wool was not shed, the livestock dying out thus.

The neighbours then devised means to get a replica of the exiled Shepherd to fight off the beasts when they reared their ugly heads again, since they saw it cheating what they did.

That individual should be chosen after winning a combat that involved fisticuffs, biting, kicking and killing of any aspiring shepherd to that enviable position.

Truly, they got amongst them their strongest.
The only lack was that this new shepherd was not any match to the exiled Shepherd. The replica shepherd only fought his neighbours and made friends with the beasts to trade the sheep, albeit at a loss.

It got to a time the beasts literally owned the flock, dictating to the replica shepherd what to do, and what not to do.

This caused the sheep to scatter from their pen, and lived wandering to fend for themselves without a Shepherd.

The beasts paid men of inhumane hearts to have different pens to balkanise the flock.

Such pens are never built well fortified against invasion by the preying beasts. Care for the health of the flock was zero. When the exiled good old Shepherd was informed of the sorry state of his flock, he fell ill and died a miserable man in a foreign land.

Today, the old Shepherd, Kwame Nkrumah with his Ghana or Africa battling a global pandemic in Covid-19 would wish the independence hero comes back from the grave as a Master Builder. As a good Shepherd, he knew the needs of the flock, ie, good housing and good healthcare.

When lockdown restrictions were imposed in Ghana and Africa, the head potters, otherwise known as Kayayes, didn't have homes to enter. They wanted to smuggle themselves to their villages. The government brought them back to the cities promising feeding, housing and stipends.

That was a nine day wonder. The homeless are back in the streets, braving the Covid-19 coronavirus unprotected enough, or at all.

Meaning, Ghana and Africa, behaving like the wicked parent who only pamper the child when on sickbed, can care for the vulnerable in times of crisis, and yet, as the replica shepherd, reneges on that needful duty?

What then becomes of the usage of our bequeathed resources?

It's time the youths of Africa wake up to join clothes with the *One Ghana Movement (1GhM)* in our quest to rescue and build from rubbles Ghana and Africa Kwame Nkrumah, the good old Shepherd dreamt of.

Ghana and Africa deserve better than our present status!